A 36-year-old Nigerian, based in Italy, Nwakanma Uche, has excreted 95 pellets of heroin, after he was arrested by operatives of the National Drugs Law Enforcement Agency ( NDLEA). 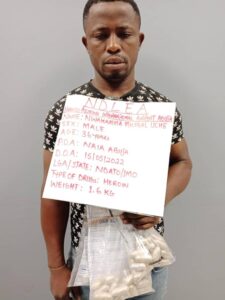 Uche was arrested at the Nnamdi Azikiwe International Airport (NAIA), Abuja, after it was discovered that he had ingested the pellets.

Babafemi said that Uche, who hailed from Arodizuogu Village, Ideato Local Government Area of Imo State, was nabbed while trying to board an Air France plane on his way to Paris, France, and Milan, Italy, on Sunday, May 15, 2022.

“He was thereafter kept under observation, during which he excreted the 95 pellets of the illicit drug.

“He claimed he came to see his parents in Nigeria after 12 years in Italy.

“He added that he was to be paid N 1.5 million after a successful delivery of the drugs in Milan,” he said.