The Ilorin Zonal Command of the Economic and Financial Crimes Commission (EFCC) has called on stakeholders particularly law enforcement agencies, to support the anti-graft crusade of the commission. 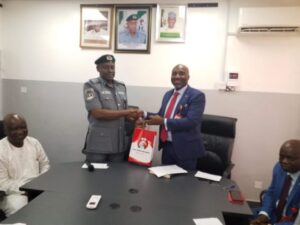 The EFCC Zonal Commander, Mr Michael Nzekwe, made the appeal during a familiarization visit to the Customs Area Comptroller in Kwara, Aliyu Bello in Ilorin on Monday.

Nzekwe said the visit was to seek a buy-in of sister agencies to work together and free the country from the shackles of corruption.

He highlighted the importance of collaboration in order to fulfill the mandate of the commission, as stated in Section 6 of the EFCC Act.

“The EFCC alone cannot win the anti-corruption war without the support of key stakeholders,” he added.

According to him, the Act requires the commission to enforce responsibilities and take measures to prevent economic crimes through aggressive public enlightenment and education.

“If the collaboration between the two agencies is strengthened, economic saboteurs and other sundry criminals wreaking underserved havoc on the nation’s economy will have no hiding place,” Nzekwe said.

Responding, the Customs Comptroller, Bello, commended the EFCC for its giant strides and promised to cooperate and support the commission in forging a united stand against corruption.

He said that both the Customs and EFCC had worked closely in special joint operations, investigations and training.

“In the past, Customs and EFCC collaborations have been a reference point for best practices and we are glad to say that the relationship has extended to frontiers of our collaboration to fight corruption.

“In synergy, we are sending strong signals to all economic saboteurs that they now face a more difficult task to evade payment of customs duty or illegal movement of cash through our borders,” the customs boss said.