The owners of Ever Given’s cargo expect to know the fate of the release of their merchandise this coming Sunday when Egyptian courts meet to review a compensation case filed by Suez Canal Authority (SCA). 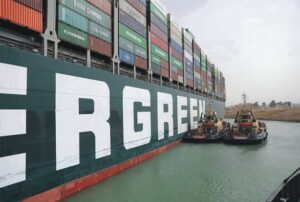 On May 29, the Ismailia First Instance Economic Court adjourned the case to allow the SCA and shipowner Shoei Kisen Kaisha to negotiate an agreement on compensation for the boxship’s blockage of the Suez Canal in March.

With the parties failing to reach an agreement, the case will be back in court on June 20 with cargo owners hoping for a determination that will allow the release of the 18,300 cargo containers, some of which are said to contain perishable goods.

Dixons Carphone, IKEA and Lenovo are among companies and retailers that are counting losses as goods worth $780 million remain stuck in Egypt indefinitely. The owners will have to pay a general average bond to get their goods back, but those goods cannot be delivered until the ship is released or another solution is found.

The Ever Given and her cargo have been held in the Great Bitter Lake area of the canal after the courts gave SCA authority to detain the mega ship, which caused an unprecedented snarl-up after it ran aground and blocked vessel traffic for six days.

The UK Club, the protection and indemnity insurer of Ever Given, announced that serious and constructive negotiations are ongoing and that the involved parties hope for a resolution in the near future.

The UK Club said the owners of the Ever Given have also filed limitation proceedings in the High Court of London, with hearings due to take place in the near future. “For the avoidance of doubt, these proceedings do not involve the SCA,” it said.

The determination of the Economic Court on Sunday is eagerly awaited because it could unlock the compensation impasse and facilitate the release of Ever Given’s cargo.

SCA is demanding $550 million in compensation, a 40 percent reduction from its previous push for $916 million. The authority had said that it will accept $200 million in advance to allow the vessel to leave, and the remaining $350 million can be paid later with letters of guarantee.

Ever Given’s owners and insurers have disputed SCA’s damage claim, describing it as “largely unsupported” and accused the SCA of not providing a detailed justification for the extraordinarily large value.

The Panama-flagged Ever Given is owned by Panama-based Luster Maritime, a subsidiary of Japanese Shoei Kisen Kaisha. She is chartered to Taiwanese carrier Evergreen, with ship management by Japanese firm Higaki Sangyo Kaisha and technical management by the Hong Kong division of BSM.

As the shipowner, Shoei Kisen Kaisha is widely expected to bear the brunt of damage claims from shippers and shipping interests.