Mr Saheed Adejare-Alaran, ex-chairman of Iseyin Local Government in Oyo State has appealed to the Nigeria Customs Service (NCS) to engage superior technology devoid of gun duel in the fight against smuggling. 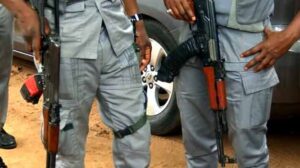 Adejare-Alaran said on Monday in Iseyin that the clash between operatives of the NCS and alleged smugglers on May 14 in Iseyin that led to loss of lives was unnecessary.

According to him, the loss of lives was needless and should not be; all the Customs operatives need do was to engage superior technology at the various borders to curtail smuggling.

It was learnt that no fewer than four persons were hit with stray bullets when customs officers shot sporadically in the air after intercepting smuggled goods near the Iseyin border.

Daniya said the NCS never shot sporadically in the air.

He said the alleged smugglers, who were aggrieved with the seizure, mobilised thugs about 3pm and attacked the Customs operatives.

Duniya said that the mob attacked the officers with dangerous weapons which led to the infliction of serious injuries on two officers.

“They attempted to abduct one of the officers that was brutally attacked; who sustained deep cuts in his head and other parts of his body.

“But his team mates acted in self-defence.

“The officers shot at the suspected abductors leading to the death of three of them before the injured officer was rescued and taken to hospital,” he said.

Adejare-Alaran said that the clash would have been avoided if the NCS had engaged a superior operations at the point of entry.

The All Progressives Congress (APC) chieftain, said that the NCS should make use of modern technology in their operations instead of gun duel approach.

“I feel the pains of the people who lost their love ones to the gun duel. May God grant the families of the dead the fortitude to bear the loss,” he said.