The Minister of Industry, Trade and Investment, Otunba Adeniyi Adebayo on Monday in Abuja inaugurated the `Export4Survival’ campaign’ to boost the country’s non-oil export. 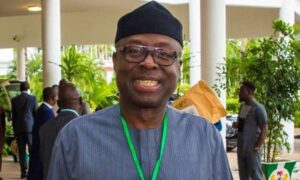 The`Export4Survival’ campaign is a flagship theme of Nigerian Export Promotion Council (NEPC) aimed at sensitising the business community on inherent benefits in the non-oil export sector.

It is also geared toward driving economic diversification through the export of non-oil products and services.

According to the minister, the launch of this campaign is an official endorsement of the initiative to stimulate the consciousness of all Nigerians to the realities of our time.

He emphasised that the diversification of the productive base of the economy is key to employment generation, wealth creation and poverty reduction in Nigeria.

While urging Nigerians to embrace the non–oil export initiative, Adebayo expressed hope that the campaign would be a game changer in Nigeria’s socio-economic space.

“The `Export4Survival’ campaign should therefore be embraced by stakeholders.

“The business community, Micro, Small and Medium Enterprises (MSMEs), trade associations, the organised private sector should embrace it as a brand that will be a game changer in the socio-economic space of our national development.

“As part of efforts at creating awareness on non-oil export development and promotion activities of the council, there is no gainsaying the fact that with the Export4Survival campaign, significant mileage would be gained in the volume and value of exported Nigerian products and services.

“It is also envisaged that with the launch of this campaign, more activities would be seen to be taking place in the non-oil export ecosystem that would increase foreign exchange earnings into Nigeria,” he said.

He, however, tasked practitioners in the non-oil export value chain to adhere to global best practices for their products to receive acceptability with zero export reject and be competitive in the international market.

The minister said that it was critical in to sustain this campaign.

“It cannot therefore be overemphasised that the success of the Export4Survival campaign needs the buy-in of all players in the non-oil export space,’’ Adebayo said.

Earlier, Dr Ezra Yakusak, the Executive Director, NEPC, said that the event signaled the beginning of a commitment to reposition the operational activities of the council’s mandate to develop and promote non-oil export sector.

“We at the NEPC, believe that our vision to make the world a market place for Nigerian non-oil products is very key in rejuvenating our fragile economy.

“However, this cannot be achieved by the council alone.

“It is against this background that we conceived the Export4Survival campaign as part of strategic initiative to increase the awareness of opportunities in the sector and benefits of exporting Nigerian goods and services to the overall growth of the economy.

“The idea is to stimulate Nigerians to imbibe the export culture,” he said.

“I wish to reiterate that the campaign is a patriotic call on all Nigerians to realise the urgency of engaging in non-oil export trade as a viable means of economic growth, industrial development and boosting our foreign exchange earnings.

“This rebranding exercise is germane to realising our mandate as a Trade Promotion Organisation (TPO) as well as reposition the council for better performance.

“This is premised on the fact that, over the years the NEPC has undertaken series of branding activities from “We Grow At Home, To Sell Abroad” to “Export Business, Tomorrow Business” and now to the current campaign “Export4Survival”.

“The unique proposition of the present campaign underlines our resolve to change the narrative and position the non-oil sector as the only means of surviving as a nation.’’