The Lagos State Government has commenced a three-week disinfection and decontamination of 35 major poultry markets in the state to prevent the spread of avian influenza and other zoonotic diseases. 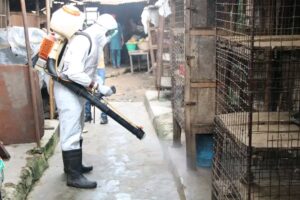 Speaking at the commencement of the exercise at Awolowo and Alasalatu Live Bird Market, Mushin, Makanjuola said that the initiative was adopted by the state government to prevent the spread of avian influenza and other zoonotic diseases.

He said that the second edition of the exercise would take place in December.

Makanjuola said that the state would continue to take the necessary preventive measures to avoid importation of the disease being the hub of live bird market in Nigeria.

“Bird come into Lagos from every part of the country, Lagos is the hub of live bird market and in order not to have any outbreak of bird flu that are occurring in other states, we must prevent it.

“This is a preventive measure to guide against the importation of the disease into Lagos. This exercise will hold three times a week for the next three weeks in all the major bird markets.

“Government has trained live bird marketers severally, they know the basic principle of biosecurity; we also trained them to know that cleanliness is the main control of the disease.

“We have trained them to know that when they go to the farm to purchase the bird, they can identify diseased birds and they will not bring it to the state,” he said.

Makanjuola said that the state had recorded one outbreak of the disease this year when compared with over 60 cases in 2021.

Also speaking, Dr Modupeola Sito, Federal Veterinary Epidemiologist, the Federal Ministry of Agriculture and Rural Development, Lagos Directorate, said that the Federal Government had directed every state to embark on the exercise.

“This exercise is to prevent the introduction of disease positive agents such as viruses, bacteria and fungal.

“We want the marketers to continue with the biosecurity measures such as cleaning and use of recommended cages plastic and against wood so that it will be easier to clean,” she said.

Sito, however, called for the cooperation of members of Live Bird Marketers and all other stakeholders to ensure the success of the programme.

Also, Chief Olusola Osoba, the President, Live Bird Marketers, commended the state Commissioner for Agriculture for the continuous support to prevent the outbreak of zoonotic diseases in the state.

Osoba said that the association would continue to educate members to maintain good environment and personal hygiene everyday.

“I want to thank the state government for always fumigating our market so that we will not have any outbreak of disease and loss of livelihood,” she said.

She added that since the government began disinfecting, the markets had not recorded any outbreak of bird flu or any major loss of money.