Following Multiple Suicides, 200+ Sailors Shifted Out Of US Navy Vessel

After a series of suicides committed by crew members on a US naval vessel, the officials declared that they are shifting sailors of the aircraft carrier, USS George Washington, and had given them permission to live off the ship. CNN has reported that the US Navy has moved over 200 sailors, and is examining the deaths of seven, including four by suicide in 2021. 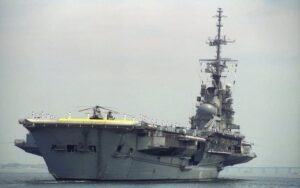 Per the Washington Post, three members of the crew are, so far, believed to have passed away by committing suicide this year, in April — within a week of one another. Many news outlets report a dismal scenario on the docked vessel in Newport News, Va., that has reportedly been undergoing a massive overhaul for refuelling its reactors and upgrading the combat systems.

Delays in work, however, at times have abandoned the boat that lacked functional washrooms, running water, and hot meals. ABC News has reported that following the string of deaths, and complaints from the crew, the Navy has started offering temporary accommodation for the staff of the ship.

Read Also:  “I Am The Founder And Spiritual Leader Of The NNPP”

While the chunk of the 2,700 crew members lives off-vessel, 260 of 400 on-ship crew members can access an accommodation located elsewhere. Additional 50 members of the crew will be offered an option next week.

Last week, Russell Smith, the Master Chief, paid a visit to the vessel to take questions and speak to the crew members. He acknowledged that for sailors working on a ship that is going through maintenance activities, it may seem like a tough affair.

CNN reported that Lloyd Austin, the Defense Secretary was working to address military suicides. Until now in 2022, the Navy has had 18 active members take their lives. Per the US Defense Department, in 2020, 580 service members committed suicide, and rates across branches of the military have gone up over the last five years.