Maritime authorities in Greece have renewed calls for Iran to release the crews of two seized oil tankers.

The Delta Poseidon and Prudent Warrior were taken by the country’s Islamic Revolutionary Guard Corps (IRGC) in the Persian Gulf last month in a tit-for-tat move. 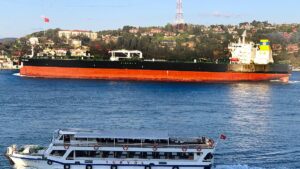 The Greek Coast Guard and independent monitoring services have said the two tankers are moored at the Iranian port of Bandar. At least nine Greek nationals and one Cypriot were on board.

Tehran has stated that the crews are in “good health” and have not been detained.

The move came just days after Athens announced that it would hand over a reported 700,000 barrels of Iranian crude oil from a Russian-flagged tanker it impounded over to the US.

The Russian vessel, which tried to switch its flag to Iran at the eleventh hour, was seized on April 19 off the island of Evia due to global sanctions linked to Russia’s war with Ukraine. US and EU sanctions also bar countries from buying Iranian petrochemical products.

On Tuesday, Iran said that Greece had released the Russian tanker after a court order to return the oil to Tehran.

“The Greek government issued an order to this effect, and now we are witnessing the lifting of the seizure of the ship and its return to its owner,” Iran’s port and maritime authorities said in a statement.

But a Greek court has temporarily banned the ship from departing the country’s waters amid “financial claims” from a tugboat company.

Greek authorities are still hopeful that the release of Iranian oil will prompt a similar move by Tehran.

Dramatic footage from May showed armed IRGC officers descending onto the deck of one of the Greek vessels from a helicopter.

Greek Merchant Marine Minister Ioannis Plakiotakis has described the Iranian seizure as a threat to the security of shipping and commerce.

“We call on all nations to act to put an end to this unacceptable incident and ensure that it does not happen again,” he said on June 3.

Both Germany and France’s foreign ministries have also condemned the seizure of the Greek tankers and called on Tehran to release the ships with their crew. The Iranian government had called the statements “biased” and “inappropriate interference”.