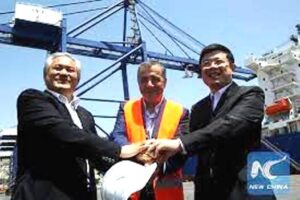 In the original deal that Cosco reached with the Greek government in 2016, the terminal operator committed to invest a total of $340 million into the port’s infrastructure by 2021. In exchange, it received the right to buy the additional stake out of escrow for an agreed price of about $100 million.

However, Cosco has not come close to achieving its investment commitment, and its leaders have put the blame on local opposition. Piraeus is the epicenter of the Greek shipping industry, and Cosco’s plans for a new cruise terminal in the neighborhood are not universally popular. The costly terminal project became ensnared in litigation, and it came to a halt shortly after it first broke ground.

Last month, Cosco successfully renegotiated its contract with the Greek state in order to get up to five more years to complete its investment commitment in Port of Piraeus. The deal was approved by Greece’s Court of Audit in August and ratified by Greece’s parliament on Thursday, giving Cosco its full 67 percent stake in the port. The new contract stipulates that if Cosco cannot achieve the investment target within the new timeframe, it will have to return the 16 percent stake to the Greek government.

In comments before parliament on Wednesday, Greek Shipping and Island Policy Minister Yiannis Plakiotakis said that “there were several causes” for the delay in Cosco’s investments, and he advocated for the new contract on practical grounds. Denying Cosco the additional 16 percent stake through litigation would “destroy the investment environment the government is trying to build from the very first day,” he said, and would threaten Greek relations with “a powerful third country.”