The suspended Managing Director of the Nigerian Ports Authourity (NPA); Hadiza Bala-Usman has faulted a news story that was published in an online medium; Sahara Reporters, which alleged that the NPA under the suspended MD spent unapproved N831million on hotels in 2016,2017. 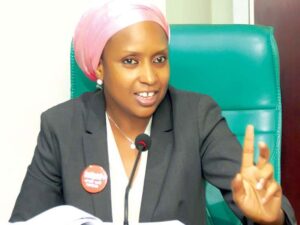 Reacting to the report, in a statement she personally signed on Friday, Hadiza noted that, “”it must be obvious to all Nigerians of good conscience that Sahara Reporters is sworn to a ceaseless campaign of calumny against my person”.

She added that, “over the past two weeks, the publication has continued to spread false and rehashed stories directed at maligning my personality and casting aspersions on my reputation and service to the nation. This, they do in total disregard of all rebuttals, which would have been needless but for the need to maintain my personal integrity and that of my family”.

“On Thursday May 20, 2021, Sahara Reporters published a story with the headline: “Budget report indicts ex-NPA boss, Usman shows unapproved N831million spent on hotels in 2016,2017.” This story shows the relentless war that the publication is waging against my personality for reasons best known to them.

“The fact is that the NPA has its audited financial statements for the years 2016, 2017 and 2018. These statements have the authentic figures of the Authority’s expenditure over those years”, she stated.

According to her, the online medium has been using unauthenticated documents to malign her image, “apparently because they fit the already concocted and devious narratives that they love to sell to the public”.

She also denied ownership of a building located in Kaduna, which the newspaper has ascribed to her.

“Earlier in the day on Thursday, Sahara Reporters Television released the video of a building with the title, “Alleged Zaria edifice built by Hadiza Bala Usman while in office as MD of Nigerian Ports Authority. Again, this story is total falsehood, and a pathetic reflection of what Sahara Reporters has become”

“I challenge the publication to produce any document that links me with this building”, she stressed.

“More importantly, it is time to serve notice on Sahara Reporters and its cohorts to desist from publishing unfounded stories targeted at tarnishing my image.

I have chosen to maintain a calm mien to this consistent falsehood, conscious of the demand of accountability, which national service places on me.

However, there is always a limit to which one can endure this needless perpetuation of falsehood.

I will take legal action against Sahara Reporters if it continues in this manner”, she warned in the statement.