Hapag-Lloyd is to take a 30% stake in Eurogate’s Container Terminal Wilhelmshaven at Germany’s JadeWeserPort following APM Terminals’ decision to exit the facility. 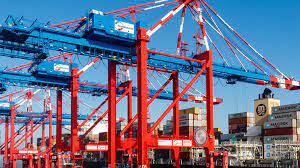 Neither of the companies, nor majority stakeholder Eurogate, have disclosed financial details. The deal is subject to regulatory approval but is expected to be completed within a few months.

Hapag-Lloyd will also acquire 50% of the shares of Rail Terminal Wilhelmshaven at JadeWeserPort. Eurogate continues to hold the remaining shares.

A spokesman for APMT said the reason for the sale was that CTW was no longer an asset it was focusing on.

“We have stakes at other terminals in the vicinity at Bremerhaven,” he said. “For Hapag-Lloyd, it was a facility where they wanted to bring in more volumes, so it was a natural choice. It is a logical sequence of events.”

The investment by Hapag-Lloyd is likely to boost its fortunes, as the company has indicated it wants to use it for its The Alliance services from 2023, when Hapag-Lloyd will begin to receive its latest orders for 23,000 teu tonnage.

Hapag-Lloyd has in the past been reluctant to invest in terminal operations, unlike many of its container line rivals, many of which have terminal investments.

To date, its only other investments have been a 25.1% stake in Hamburg Hafen und Logistik’s Container Terminal Altenwerder in Hamburg and a 10% stake in the TC3 Alliance that operates a facility in Tanger Med.

Chief executive Rolf Habben Jansen has previously indicated that the company had no plans to expand into terminal operation, and that there was little benefit to be had in terms of avoiding congestion from having equity stakes in terminals.