The whole shipping industry has wholeheartedly welcomed Ever Given’s departure from the Suez Canal to Rotterdam, the destination where it is set to arrive over the next weekend. 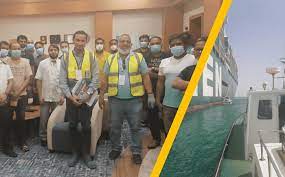 Following a special ceremony to formalize an agreement between the Egyptian authorities and Shoei Kisen Kaisha (the shipowner), the ship departed from the Great Bitter Lake, where it was from 29th March, to be part of a survey.

The owner has said that the company has a huge fleet of ships and is going to continue being a loyal customer of the Suez Canal. We recognize the importance of the goods carried by vessels and regret the impact of the voyage delay resulting in the cargo being stuck onboard.

The International Chamber of Shipping had played a vital part in the negotiation, welcomed the news, and the relief for the onboarded crew. Guy Platten, the secretary-general has said that he is grateful that the parties have eventually reached a peaceful settlement.

He also added that the incident cost almost $5.1bn a day in world trade. However, this was a drop in the bucket in comparison to the emotional and financial costs that the industry had to deal with owing to travel restrictions imposed on seafarers by governments.

The insurer, the UK P&I Club said that right from the outset the UK club, with the shipowner and insurers, has aimed to come to an amicable settlement with the Suez Canal Authority (SCA) to permit the ship, crew, and cargo to resume the voyage. After over three months of negotiating, an agreement had been reached.