South Korean Hyundai Heavy Industries Group has changed its name to HD Hyundai, the company said in a regulatory filing. 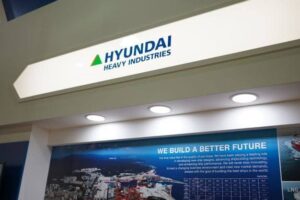 According to Korean media reports, the name change coincides with the 50th anniversary held in Seongnam, Gyeonggi Province, which served as the stage for the company to declare its new vision.

The company revealed its three core business vision pillars, those being:

“realizing a sustainable future energy ecosystem” in the energy sector, and

“providing industrial solutions that go beyond the limitations of time and space” in the industrial machinery sector.

Technological innovation in line with maritime decarbonization and digitalization has been identified as key to success in the future 50 years for the business.

It has been a great year for KSOE’s yards, as the company managed to exceed its yearly target of $17.4 billion. Namely, KSOE has won orders for 190 vessels, mainly driven by the demand for LNG carriers, pushing its orderbook to $22.8 billion.

The need for ever greener vessel design has been one of the key drivers of innovation at KSOE. Some of the most recent projects the company’s yards embarked upon include development of fuel cells for ship propulsion as well as development of vessel design powered by alternative clean burning fuels such as methanol, ammonia and hydrogen.

Two months ago, KSOE revealed that it was embarking upon a project with Shell, Doosan Fuel Cell, HyAxiom, and classification society DNV to use a 600KW high-efficiency solid oxide fuel cell (SOFC) for power generation on a 174,000 cubic-metre LNG carrier to be run by Shell from 2025.

The LNG carrier will use fuel cells as an auxiliary power unit (APU) and perform its demonstration for one year on the actual trade route.