A cargo of Iranian condensate intended for Venezuela’s state-run oil company, PDVSA, the fourth delivery this year, will discharge in coming days at the country’s main oil port, a Venezuelan lawmaker said on Thursday. 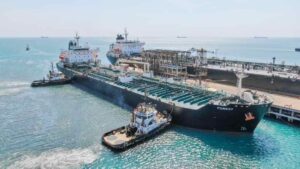 The swaps, occurring amid U.S. sanctions on both nations and their oil industries, have allowed PDVSA to ramp up crude output this autumn to levels close to those of early 2020.

“Two million barrels of diluent have just arrived. Where? – from Iran,” said Angel Rodriguez, a lawmaker from President Nicolas Maduro’s socialist party. “This shows what is the country’s situation. We are forced to receive products we used to make due to the blocking,” he added, referring to the U.S. sanctions.

Rodriguez did not disclose the name of the vessel. PDVSA and NIOC did not reply to requests for comment.

Washington imposed trade sanctions on PDVSA and its subsidiaries in 2019 as a way to oust Maduro after it called his re-election a sham. The measures barred exports to the United States, which used to buy most of Venezuela’s crude.

PDVSA has adapted to the measures by finding new customers and ways to ship its crude and refined products to countries including China.