Truckers have alleged that majority of the trucks that are abandoned under bridges in Lagos were kept there by officials of the Lagos State Traffic Management Authority (LASTMA). 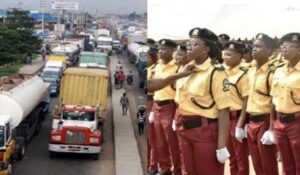 ome on the heels of the recent impoundment of illegally-parked and abandoned trucks by the Lagos State government.

Recall that Gov. Babajide Sanwo-Olu had recently ordered the removal of all abandoned vehicles that are parked indiscriminately under bridges across the state.

Last week, the General Manager of LASTMA, Mr Bolaji Oreagba confirmed that 40 illegally-parked trucks, tankers and trailers under flyovers at the Costain/Iganmu axis have been impounded. He said the exercise came following the expiration of a seven-day ‘removal notice’ served on owners of such illegally parked and abandoned vehicles. He added that the owners and drivers of the impounded vehicles would be charged to court accordingly.

However, speaking with Shipping Position Daily last week, the Administrative Secretary of the Association of Maritime Truck Owners (AMATO), Mr Bala Muhammed noted that the issue of trucks parking indiscriminately under the bridges within Lagos metropolis is because of inadequate parking facilities for truckers.

Bala said truckers have severally met with the state government to collaborate and work out ways for the provision of Truck parks to checkmate and fight the menace associated with indiscriminate parking and criminal activities.

Speaking further, the AMATO Chieftain alleged that many of the trucks impounded by LASTMA are currently left under the bridges due to lack of adequate truck parks or spaces to warehouse them. He specifically revealed that many of these trucks can be found under the Iponrin and Ijora Phase 2 bridges.

Bala also informed our correspondent that the association has not received any official complaint from any of their members that their trucks were impounded.

Bala however advised the Lagos state government to look beyond indiscriminate parking of trucks under the bridges, but give the right remedy of providing mega marshalling yards for trucks.

In his words: “The issue of trucks parking indiscriminately under the bridges within the Lagos metropolis is a symptom of a problem which has to do with inadequate parking facilities. We have approached Lagos state government on several occasions to see how we can collaborate with the trucking operators and other relevant stakeholders towards the provision of Truck marshalling yard that would accommodate booth tankers and dry cargo operators, so that there won’t be spillover of trucks parking indiscriminately under bridges across Lagos state metropolis”.

Ogbodo noted that Lagos state government is only trying to push truckers to the wall through their policies and if not quickly addressed through the provision of truck transit parks where they can keep their trucks off the roads, they might be forced to bounce back by staging a strike action.

He maintained that the cargo throughput of the ports has increased hence the call on the government to expand the needed infrastructure.

“If there are basic facilities for the parking of trucks or transit parks, will they park the trucks there? The Government is shying away from the truth. 80 percent of the cargo generated from the country come through Lagos port and these trucks are coming from all over the country to come and carry cargo. Are you saying that these trucks that have their original parks from wherever they are coming from should come and own other parks in Lagos? It is like you are going to visit someone at his house and he says you should go and look for somewhere to park your car.

“The government is biased and sectional. Why is it that they are going after the dry cargo leaving out the wet cargo? Why don’t they tamper with the tankers? This is because if they do, the tankers would go and what will follow will be scarcity of petroleum products. The State government is sectional; looking at these issues. If you don’t want trucks, then both dry and wet cargo should stay clear.

“When truckers come to Lagos to do business, accessing the port is a problem. There are lots of illegal checkpoints along the corridor. This is like pushing us to the wall and it will get to a point that it will bounce back. If these truckers decide to go on strike, they will refuse to come to Lagos.

“In Apapa alone we have close to 63 Tank Farms. The cargo throughput when that port was constructed has been expanded. So why is the government not expanding infrastructure in line with the expansion of the Cargo throughput into the country. There is a deficiency. The number of checkpoints we have is even enough to slow down port accessibility” Ogbodo concluded.