Developer of the Lekki Port LFTZ Enterprise Limited has assured of its Ddelivery before third quarter of 2022, even as it added that work has reached almost 80 percent completion, as at December 2021. 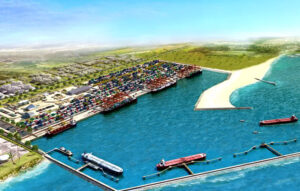 According to the Construction Completion Status report sent to our correspondent on Thursday, works at the dredging and reclamation site have reached 89.93 percent while the building of quay walls has reached 85.65 percent.

The status report further stated that work on the breakwater has also advanced, and it now stands at 79.66 percent while construction on the landside infrastructure, which will house the port terminal, Customs examination bay and other administrative buildings, is now at 67.82 percent.

An overview of the report stated that the total construction work in the port site now stands at 79.68 percent, which is approximately 80 percent at the time of the report.

According to the management of the Lekki Port LFTZ Enterprise led by Du Ruogang as the managing director, Lekki Port project is on track for the commencement of port operations later this year as it was projected that the port will be delivered in the third quarter of this year.

Read Also:  Navy Intercepts N100m Worth Of Cannabis, Others During Yuletide

“We are pleased to report that Lekki Port is now at almost 80 percent completion. We are confident that with the continued support of our esteemed stakeholders, we are on track for the commencement of port operations later this year,” the management stated while commenting on the development.

Lekki Port is expected to have 16.5 meters draught, which is the deepest in Nigeria and a capacity of 2.7million twenty-foot equivalent units (TEUs) of containers per annum.

As a multi-purpose deep seaport that is located at the heart of the Lagos Free Trade Zone, Lekki Port will be one of the most modern ports in West Africa, offering enormous support to the burgeoning commercial operation across Nigeria and the entire West African region.

By projection, the port project is scheduled to be delivered by the third quarter of this year.