Kogi State Deputy Governor; Edward Onoja says the Itakpe-Lokoja-Abuja standard gauge rail line should be prioritised, because the route links the Northern and the Southern states of the country. 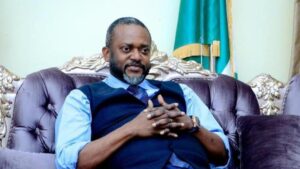 Onoja said this in an interview after riding the Warri-Itakpe train in Itakpe, Kogi.

Onoja,who spoke after boarding the Warri-Itakpe train in Itakpe, Kogi, commended the Federal Government and the Ministry of Transportation for the invaluable infrastructural feat.

“My experience was a pleasant one, though with hitches here and there, but pleasant in the sense that by comparison, moving from Itakpe to Warri with the only option, which is by road.

“This by far outweighs it, in the area of comfort, risk level and by all standards, Kogi government has done a lot by attracting infrastructural development to the state.

“The rail line is strictly a federal government infrastructural project, the proximity between Lokoja, the State Capital of Kogi and the Federal Capital is less than 200km.

“Which eventually, linking Warri, and the entire South South to the federal capital, should not be something the state government should be pursuing, it should be a priority for the Federal Ministry of Transportation.

‘`It should not be something that should be lobbied for, it should be a priority, “ he said.

The deputy governor stated that, Lokoja was the gateway to the North and South, adding,”Gov. Yahaya Bello has made the state secured, which is a good platform for investments.

“Kogi is a good investments destination, Lokoja is closer to FCT, where the whole world comes to.

” Therefore, it is key to link it by rail and it should ordinarily be as a baseline and priority to the minister of transport.

“Which he already said he would close that gap, the distance is less than 200km, it is not a 1,000km project.

”The challenges I can see here, might be the River Niger, which needs to be crossed.

“But, even Itakpe rail line also crossed some rivers as you move to Warri, so crossing river is not the major challenge and the issue of land allocation for the stations within the state, will not be an issue.

‘`Connecting virtually every state capital to the rail way system in Nigeria, is a long time effect, it will take pressure off the road, which ultimately reduces the number of lives lost due to reckless driving.”

Onoja however, called for proper the maintenance of the Warri-Itakpe rail operations.

”My tickets were hand written, while e-payments were not accepted. I paid cash.

”The coaches were over crowded with over 100 passengers in a coach, while the digital announcement board was not functional, among other observed hitches”, he said.