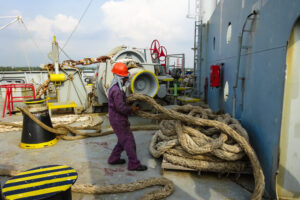 This is the most common and obvious reason as these days more seafarers want “settled” jobs on shore. At the start of the career, a seafarer would not mind having a “nomadic” kind of lifestyle, but after certain years, especially post marriage, he longs for a more stable lifestyle, especially with his family. This is definitely not a new reason behind seafarers quitting sea jobs, but it is still one of the prime reasons for professional dissatisfaction.

One cannot deny the fact that life on board ships has become extremely hectic. With more stringent maritime regulations coming up each year, life as a seafarer has become increasingly hectic, laborious, and monotonous. Increase in paperwork, advanced training guidelines, new codes, and rigorous safety and environmental laws have made the lives of seafarers extremely hectic on board ships. Moreover, many seafarers have also stated poor management of manpower on board ships as a reason for increase in work load. Needless to say, the already hectic life on ships is becoming even more hectic every year.

No matter how hard you try to stay away from professional or personal politics on board ships, it will get to you sooner or later. Politics and conflicts on ships not only make it difficult to work but also to socialize within the already small group of people on board. Moreover, there is a very thin line between professional and personal life on ships. This makes it even more difficult to avoid as well as deal with politics or conflicts arising as a result of differences in opinions. One needs great determination, patience, and skills to deal with difficult people on board ships, especially after having professional/personal arguments.

Almost everyone who joins ships is brought up in a social environment since birth. When such people are suddenly exposed to confined spaces of ships with almost negligible social life, negative effects such as frustration, loneliness, and homesickness start taking a toll on them. Initially the life on ship might not seem bad, but as time passes, a sense of emptiness starts creeping in. Lack of interaction with people and limitations on physical movement make life more miserable on board. It takes a lot of courage and mental steadiness to keep a calm and focused mind on ship. Many seafarers eventually quit because of this reason.

5. Away from the Family

Though most of the seafarers can digest the fact of staying away from friends for few months when sailing, parting away from the family for months together is what tear their hearts apart. Some might have just started their married life while others would have recently experienced parenthood, missing those precious moments with their loved ones for whom they care the most, is what hurts seafarers to the core. No seafarer wants to miss spending time with his wife or see his son or daughter grow old without him being around. It is then that seafarers realize the importance of “family life” and “loved ones”. The pain of staying away for months is also one of the main reasons seafarers quit sea jobs.

One cannot stay focused at work when bothered by family or personal issues. Seafarers often face this problem when they leave their family problems at shore. However, not able to attend to the personal problem and its impeding negative effects on the family, induces a constant state of worry which reduces the ability to focus on one’s duties. It’s extremely difficult to work when you are physically on the ship but mentally back at home. Moreover, what hurts more to seafarers is the inability to attend to any emergency situation or incident in their family back home. Such situations lead to extreme frustration, anxiety, sleeplessness, and stress among seafarers. Many seafarers have quit sailing because of this reason.

Though several steps have been taken lately to fight piracy at sea, incidents involving pirate attacks and high-jacking of ship’s crew occur almost every month. The threat of piracy attacks is ever increasing and seafarers are obviously scared in spite of availability of weapons to fight them. No one wants to risk their lives or put themselves in danger by sailing on ships which ply in piracy affected areas. The fear of pirates is also stated as one of the many reasons by seafarers for leaving ship jobs.

Sailing on ships requires meeting stringent medical and health requirements. As strict as the rules to be meet before joining the ship are, it’s an irony that life on board ship is not even close to healthy. Erratic sleeping schedule, excessive working stress, unfriendly environment, unavailability of fresh food, and inadequate medical facilities drastically affect seafarers’ health. Moreover several seafarers also have to quit sailing once they are diagnosed with conditions which might require immediate attention in times of medical emergency. Many also complain about the increasing difference between work and rest hours, in spite of laws demanding proper distribution of them.

One of the main reasons people join merchant navy is the lure to see the world. However, in the past few years there have been a sudden reduction in shore leaves that are being granted to the seafarers. With faster turnaround time of ships at ports and scheduled maintenance procedures, seafarers are not allowed to go out on ports. Also, many VLCCs and large capacity ships don’t even come to the port for discharging or loading, giving no chance to seafarers to refresh themselves away from the ship’s environment. Such consistent sailing with less or negligible opportunities for shore leaves have frustrated several seafarers who have eventually quit sailing.

This cause might sound a bit contradictory, but this is also one of the main reasons why seafarers quit the field early in their career. Though most maritime institutes and experts promise adequate on-shore opportunities for seafarers, those wanting to shift to shore find it difficult to get a worthy job. Most of the companies ask for good amount of experience at sea, in order to get a job in their on shore office. Moreover for a good managerial position on shore, either one has to do an MBA or take up some equivalent courses. Seafarers find it difficult to get back to studies after certain point of time, especially when they are bound by family responsibilities. Many seafarers are now able to foresee this and thus change their course very early in their career. However, compromising on the salary is one thing they have to accept sooner or later.

With the financial crisis looming over the industry, shipping companies are utilizing every technique possible to cut back expenses and overhead costs. In an attempt to do so, the number of crew members on ships is being reduced to compensate the necessary expenses. As a result, mariners are experiencing substantial increase in work load, without any increase in remuneration. This trend has been seen almost across all shipping companies around the world. The higher demand of work load with same or negligible increase in payment is also making several seafarers quit sea jobs.

Stringent maritime laws have made lives of maritime professionals difficult, especially for those at the management level. Many seafarers in the past have been imprisoned, heavily fined, and suspended as a result of such laws. Officers at the management level are the ones who often bear the brunt of these laws and are therefore constantly at stress while sailing. This has been one of the main reasons for the acute dearth of maritime professionals at the managerial level.