The Management of Maritime Academy of Nigeria, Oron, Akwa Ibom State, has decried the activities of what it called “bad losers” during technical bid exercises by the Academy. 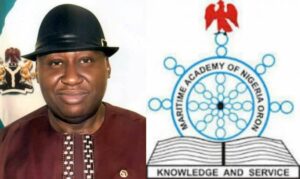 The Rector, Commodore Emmanuel Effedua (retd.), stated this on Tuesday in Oron Local Governmet Area, in his opening remarks at the Technical Bids Opening Exercise for the year 2022 capital projects which held at institution’s Auditorium.

Effedua, who was represented at the occasion by the Registrar of the Academy, Mr. Netson Peter, while describing the activities of bad losers as unfortunate, noted that the transparency that had taken place in previous exercises would continue to place in future bid processes.

He said, “This is the normal procedure that takes place whenever there is technical bids opening exercise, and one thing that has always take place and will continue to take place is transparency of the exercise.

“As an institution guided by laws, we must stick to the rules and nothing short of that. Though in the past, after such exercises, there are bad losers who would not accept that they couldn’t make it, and they will start writing petitions against the Academy.”

Read Also:  Some Nautical Terms And What They Mean

He disclosed that there was a particular loser who wrote petition indicating different companies, adding that after a thorough investigation was conducted, it was discovered that it was only just one person that wrote the petition.

According to him, we have a case in the past where a loser wrote petition indicating different companies but after the check, it was discovered from the registration that it was only just one person. This is rather unfortunate.”

Meanwhile, observers at the event made up of officials of the anti-graft agencies, the civil society organisations, and others commended the Academy for the transparency of the process.