The Nigerian Maritime University (NMU) Okerenkoko in Delta, has signed a Memorandum of Understanding (MoU) with the Nigerian Defence Academy (NDA) Kaduna on research and manpower development. 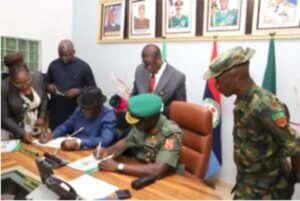 The MoU was signed by the Vice Chancellor of NMU, Prof. Emmanuel Adiogio and the Commandant of NDA, Maj.-Gen. Ibrahim Yusuf last week in Kaduna.

Adiogio identified areas of mutual benefit to both institutions to include Maritime Security and Safety, Maritime Technology, Regulation and Policies.

Adiogio said the cooperation between the two institutions was critical to the security in the Gulf of Guinea, adding that many of the NMU academics would undertake Doctorate and Masters degrees in NDA.

“We also have qualified staff to take issues on transportation, as the NDA is providing programmes for our academic staff, we will also be providing them knowledge in areas they don’t have,” he said.

Adiogio assured NDA that NMU would do its best to sustain the high standard in which the academy operates.

Responding, Yusuf, the Commandant of NDA, said that the MoU would be mutually beneficial to both institutions.

He described NDA as a military university with strong post graduate school and specialisation in defence and security studies.

Yusuf said the NDA’s naval component had conducted a lot of studies and operations within the maritime domain, and said both institutions would gain in the area of research and capacity building.

“It will also enable us exchange resource persons, research materials and joints researches related to defence and security, staff capacity development, among others,” the commandant said.

He expressed optimism that the collaborative research would project outcomes that will be beneficial to the military sector and Nigeria in general.

Yusuf expressed appreciation to the NMU for the initiative and assured them of NDA’s readiness to ensure its success.

The Director, Partnership, Linkages and Collaborations of NMU, Dr Godfrey Pondei, said the federal institution was established to provide trained manpower in the maritime sector.

The process for the cooperation between the NMU and NDA began on April 28, 2022.