The Defence Headquarters says troops of Operation Delta Safe immobilised 145 illegal refining sites in the Niger Delta region between May 2021 and Jan. 6. 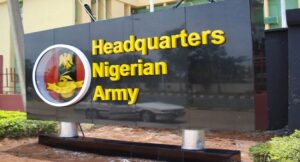 Acting Director, Defence Media Operations, Maj.-Gen. Bernard Onyeuko, said this on Thursday in Abuja while giving an update on military operations in the region.

“All the arrested criminals and recovered items have been handed over to relevant security agencies for further action,’’ he said.

Onyeuko also told newsmen that troops of Operation AWATSE in the Southwest fighting against pipeline vandals and economic saboteurs successfully forestalled criminal activities within the period under review.

According to him, troops recovered 1,594 rounds of ammunition and 14 assorted rifles in the region.

“Also, within the period, 15 illegal refining sites were immobilised, while 12 boats and 13 trucks engaged in illegal activities were seized.

“In the same vein, within the period 15 kidnapped civilians were rescued in the Southwest region, while 28 criminal elements were arrested,’’ Onyeuko added.