Troops of Operation Octopus Grip and those of Operation Delta Safe discovered and destroyed 40 illegal refineries in the Niger Delta region in the last two weeks. 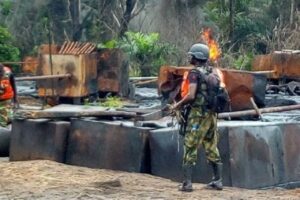 Director, Defence Media Operations, Maj.-Gen. Bernard Onyeuko, said this in Abuja on Thursday while briefing newsmen about military operations in different theatres between May 19 and June 2.

He said 165 metal storage tanks, 72 ovens, 23 dug out pits and five wooden boats were destroyed during the period.

Onyeuko added that the troops also recovered 1.1 million litres of crude oil, 456,450 litres of diesel and 6,250 litres of petrol.

He said all recovered items and apprehended criminals were handed over to the appropriate authorities for further action.

“Troops have sustained pressure on economic saboteurs and other criminal elements, and this has significantly reduced oil theft.