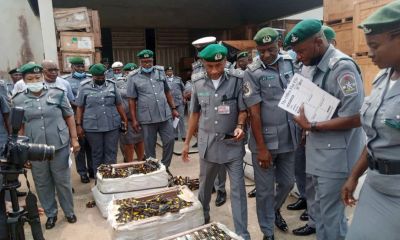 According to the Customs Area Controller in charge of the command, Comptroller Sambo Dangaladima, the collection is attributable to the sustained cooperation and support from stakeholders as well as the efforts of officers and men serving in the Command.

Speaking on the interception of Tramadol tablets by the Command, he stated: “On Monday, 1st November 2021, 35pkgs suspected to be Tramadol tablets on AWB No.071-412099755/35 were intercepted by my Officers at SAHCO Import Shed. A joint examination of NDLEA, NAFDAC and other agencies proved that it was actually 35pkgs of Tramadol (225mg) valued at N92,267,441.98. This drug was seized because it exceeded the allowable milligram of 50 or 100 (with due permission) and in accordance with Section 46B of Customs and Excise Management ACT CAP C45 LFN 2004 as amended”

In another development, the Customs Area Controller, Sambo Dangaladima paid host to some stakeholders, he urged them to always abide by laid down rules and regulations to facilitate a smooth work process.

He further expressed his happiness at the level of compliance and urged them to do better, “I am happy with what is happening now in MMAC because when I came, I know I had about three or four meetings with many of you and you promised me that you are going to abide by my rules and regulations as given by my CGC as a marching order to solve here and which by the grace of God, we are almost there. Though not completely. When I came here, I met a lot of challenges, especially the unutilized airway bills, but with the cooperation of the stakeholders, it’s 90% solved” He said.

He advised the Stakeholders to identify their clients and be involved in legitimate trade only.