More than 1,000 people crossed the English Channel in small boats the day after the total for the year exceeded 30,000, according to government figures. 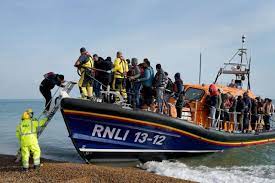 Britain’s Ministry of Defence has confirmed that 21 boats carrying 1,150 people were intercepted on Thursday.

This is the third highest daily figure in 2022 and brings the total to have made the crossing so far this year to 31,665.

The number of arrivals this week has led officials to erect special tents at Dover, Kent, to keep migrants covered as they appear to be overflowing from existing facilities while being processed.

It is more than five months since then Home Secretary Priti Patel announced plans to send migrants to Rwanda to try to deter people from crossing the Channel.

Since then, 26,397 people have arrived in Britain after making the journey.

On April 14, Patel signed what she described as a “world-first” agreement with Rwanda, under which the East African country would receive migrants deemed by Britain to have arrived illegally and therefore inadmissible under new immigration rules.

However, the first deportation flight, due to take off on June 14, was grounded amid legal challenges.

Several asylum seekers, the Public and Commercial Services Union, charities Care4Calais, Detention Action and Asylum Aid, were embroiled in court cases with the Home Office as they challenged the legality of the policy.