A containership on route from Lomé to Douala has been attacked by pirates in the Niger Delta.

Based on AIS routing, the vessel carried out evasive maneuvers during the attack, but it is now stationary. 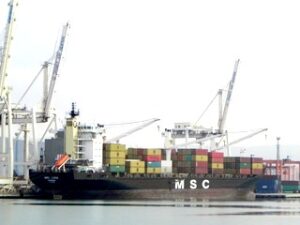 Multiple security report confirms that, the attack actually happened on Monday 25 October 2021, 0900hrs local time at 190nm SW of the Agbami Terminal, when it was attacked. Bonny, Nigeria

Initial reports had suggested that the 1985-built 1,893 teu MSC Lucia was boarded by an unknown number of armed men.

According to security firm; Dryad Global, a warship went to assist the crew, but the company could not give an Expected Time of Arrival for the navy vessel, identify it or say to which navy it belonged.

Monday’s incident came barely two weeks after the International Maritime Bureau (IMB) reported a general decline in global piracy figures between January and September this year, even as the global piracy watchdog acknowledged that the once-volatile Gulf of Guinea now shows strong decreases in all forms of crime.

Specifically, the IMB noted in the report that, “most notably, Nigeria only reported four incidents in the first nine months of 2021, in comparison to 17 in 2020 and 41 in 2018”. It added that, so far this year, only one crew member has been kidnapped in Nigeria.

The Gulf of Guinea region recorded 28 incidents of piracy and armed robbery in the first nine months of 2021, in comparison to 46 for the same period in 2020.

According to the IMB, Q3 report, “Nigeria only reported four incidents in the first nine months of 2021, in comparison to 17 in 2020 and 41 in 2018. Crew kidnappings in the region have dropped with only one crew member kidnapped in Q3 2021, compared to 31 crew members taken in five separate incidents during Q3 2020. All Q3 incidents in 2021 were also against vessels at port anchorages whilst the average successful kidnapping location in Q3 2020 was approximately 100NM from land”.

Tags: In The Gulf Of GuineaMSC Box Ship Under Attack By Armed Gang