Both Chambers of the National Assembly on Wednesday passed the 2023 budget. 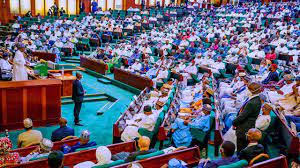 While the Senate put the estimate at N21.8 trillion, the House of Representatives pegged it at N21.82trn.

The passage at the upper chamber followed the adoption of the report of the Senate Committee on Appropriation at plenary.
Presenting the report, the Chairman of the Committee, Sen. Jibrin Barau said that the commitee did a thorough job by examining inputs from its sub-committees before reaching the final figure.
“We hereby recommend that the Senate do consider and approve a Bill for an Act to authorise the issue from the Consolidated Revenue Fund (CFR) of the Federation the total sum of N21.8 trillion.
“Of which N967 billion is for Statutory Transfers, N6.5 billion only is for debt service.
“N8.3 trillion is for recurrent (Non-Debt) expenditure.
“While N5.9 trillion for contribution to the Development Fund for Capital Expenditure for the year ending December 2023,” he said.
He said that the budget was raised from the N20.5 trillion submitted by the Executive by N1.3 trillion.
Barau said that President Muhammadu Buhari had on Oct. 7, laid before a joint sitting of the National Assembly the 2023 Appropriation Bill christened ”Budget of Fiscal Consolidation and Transition”.
He said that the President had proposed an oil price benchmark of 70 dollars, which was raised to 75 dollars by the National Assembly.
“The Executive proposed an exchange rate of N435.57 to a dollar while the national assembly approved same,” he said.
In his remarks, Senate President Ahmad Lawan, said that the passage of the budget was in line with the National Assembly’s pledge to reverse to the January- December budget cycle.
“This our fourth budget and last before the expiration of our tenure and we have kept that promise,” he said.
Lawan also urged the executive to strive hard to implement the 2022 supplementary budget.
“We have also passed the supplementary dudget for 2022. We expect total implementation. No selective implementation,” Lawan said.

This passage followed the consideration and approval of the report of the House committee on Appropriation at plenary in Abuja.

Presenting the report of the committee on Appropriations, the Chairman of the Committee, Rep. Muktar Betara commended the chairmen and members of various committees.

He lauded their efforts at keeping to the January to December budget calendar initiated by the 9th National Assembly.

The budget showed an increase of over N1 trillion proposed estimates of the executive.

The sum of N5.97 trillion is also for contribution to the development fund for capital expenditure for the year ending.