The immediate past Executive Secretary of the Nigerian Shippers’ Council (NSC), and the Chairman of the National Fleet Implementation Committee, Mr. Hassan Bello, has stated that his leaving office will not stall the take-off of the national fleet. 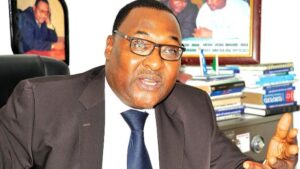 This is even as he pointed out that government policy is one of the major reasons the national fleet is yet to take-off.

Hassan Bello while speaking to our correspondent last week, informed that the newly-appointed Executive Secretary of NSC; Mr Emmanuel Jime will continue from where he stopped.

He said all that is needed to be done is to remove the hindrances which had bedeviled the take-off of the National fleet.

Bello said, provision of incentives for the private sector, granting of tax incentives, special exemption among others should be looked into for the realization of the national fleet.

He told our correspondent that, “I don’t think there is any hindrance, except that which has been in place by the conditions, my leaving office does not affect the takeoff, we have a new Executive Secretary, so he carry on from where we stopped, all we need to do is to remove the hindrance in terms of policy and provide incentives so that the private sector can come and invest, that’s the major thing, like tax incentives and then other incentives as it is done in other countries, and there should be special recognition, special exemption with that the national fleet will be a reality”.

Recall that the Federal government had in 2016, constituted a committee to screen shipping operators interested in acquiring part of the 60 percent holding for Nigerians in the proposed National fleet.

The fleet is expected to have a 40 percent foreign ownership. However, five years after, the committee is yet to meet up with the mandate of ensuring that the country owns a national fleet.

Stakeholders in the nation’s maritime industry have also over the years, called on the federal government to reactivate its plans to establish a national fleet, so as to take advantage of the global trade valued at $19 trillion

Checks by Shipping Position Daily, from the National Bureau of Statistics (NBS) showed that Nigeria’s total merchandise trade (import and export) for 2019 stood at N36.1 billion, out of which the maritime transport component accounted for N33.7 billion (97 per cent).

In spite of the huge potential, no Nigerian flagged vessel carried cargoes of the nation’s merchandise trade in the last 10 years.

Despite its contribution to agriculture, energy, manufacturing, and other identified key sectors, the maritime sector is not recognised as a key economic driver.

Further reports checked by our correspondent from the United Nations Conference on Trade (UNCTAD) (2018), put the value of intra-Africa’s merchandise trade at $159.1 billion, which accounts for 16.1 per cent of the world trade.

But Nigeria’s contribution to intra-African trade merchandise stood at a distant 6.8 per cent, that’s N10.81 billion of the intra Africa trade volume, leaving a huge market gap to be explored.

A member of the National Fleet Implementation Committee and Chairman Ship Owners Association of Nigeria (SOAN) Dr. MkGeorge Onyung, sounded unsure of whether the committee is still in place or not, while stating that he did not have answers as to what stage the committee is presently regarding the National fleet.

In his words: “The committee I don’t know whether it’s been disbanded, I am still waiting to hear; the day they call meeting I will attend, there is a new Executive Secretary who took over from Hassan Bello, so if you ask me about the National fleet I think the question is not for me, because there are issues in the industry that we must take seriously”, he said.