The Nigerian Navy Ship Victory (NNSV) has arrested three suspects with 1,209 bags of illegally smuggled parboiled rice along the waterways. 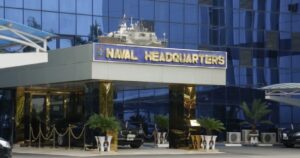 The suspects, Humble Edet, Christian Adebayo and Balle Philip, were arrested by personnel of the NNSV on patrol at 2 nautical miles, South East of the Calabar fairway buoy.

Briefing newsmen at the NNSV jetty on Monday in Calabar, Commander of NNSV, Commodore Chiedozie Okehie, said that the suspects were arrested for conveying smuggled items into the country.

“These suspects were arrested with a wooden boat laden with 1,209 bags of foreign parboiled rice at 2 nautical miles, south east of the Calabar fairway buoy.

“The suspects were arrested on Sept. 11, 2021. We are handing over the suspects and the rice to officials of the Nigeria Customs Service.

“From our interrogation, the suspects were smuggling in the items from Cameroon to Nigeria.

“I want to advise those involved in this illegal buisness to embrace genuine means of business and livelihood because the navy is fully out to ensure that such illicit act is stopped,” he said.

The Commander thereafter, handed over the suspects and the items to officials of the Nigeria Customs Service.

“We are going to prosecute the suspects accordingly, while the rice would be converted to seizure,” he said.