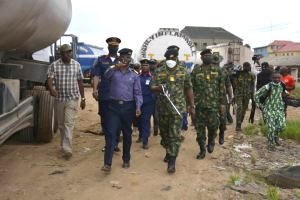 The Flag Officer Commanding (FOC), Western Naval Command, Rear Adm. Jason Gbassa, said this while addressing newsmen during a visit to the site of the illegal operation.

Gbassa, who said no arrest was made, stated that the trucks would be forfeited to the Federal Government.

“The culprits abandoned their trucks and appliances when they saw our men approaching.

“The striking thing is that people have the effrontery to carry out such illegal activities against the mandate of Operation Awatse in a built up area where people reside.

“We have the trucks with us and some of them are loaded.

“We are going to move them back to base and follow-up with further investigations and handing over to the appropriate agencies. 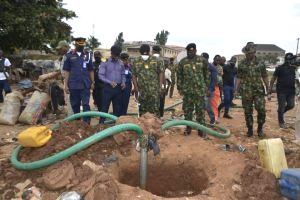 “We will follow up on this case and ensure we conclude effectively to make sure that the trucks are forfeited to the Federal Government,” he said.

The FOC noted that four people who were involved in similar incident some weeks ago had been convicted.

“We will continue to pursue the perpetrators in order to know those who are behind these illegal acts,” he said.

Gbassa added that such illegal activities had huge impact on the economy and negative consequences on the health of residents.

“If we put together this four trucks with a combined capacity of over 90,000 litres multiplied against N165; it will be going into the range of about N15 million.

“This is for just one night’s operation for a group of people to reap the nation of such commodity free without any direct investment on it.

“This invariably impact on the availability of the products to the economy and the fumes from this activity alone is a threat to the health of the residents,” he said.

The FOC said that such illegal activities required technical skills and enormous resources to muster, assuring that the command would continue to crack down on syndicate carrying out such activity.

Gbassa commended the people of the community for providing the intelligence needed to halt the illegal activity and also appreciated other security agencies who collaborated in carrying out the operation.

“I urge that we continue in this collaboration and synergy in going forward so we will get better and get more results in the pursuit of perpetrators of such crimes,” the FOC said.