The Nigerian Navy on Sunday deployed its Special Boat Service unit (special forces) and thousands of troops onboard 10 warships, two helicopters and other assets in a special military exercise. 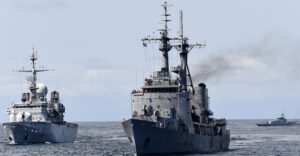 The Chief of the Naval Staff (CNS), Vice Adm. Awwal Gambo, announced the deployment at the flag-off of the CNS Annual Sea Inspection, code-named ‘Exercise Quiet Waters,’ in Onne, Rivers.

He said the massive deployment of troops and military hardware is part of a commitment to boost its operational efficiency in tackling crime and criminalities on the nation’s waters.

“So, we are deploying 10 capital ships, two helicopters and our special forces, including for the first time, naval operational bases and forward operating bases conducting the exercise.

“Both operational bases and forward operating bases will conduct backwater operational exercises simultaneously with the operation that we have at sea for the next three days,” he said.

Gambo said the exercise aligned with the Presidential mandate to the navy to ensure a conducive environment for maritime business to thrive.

“This inspection comes against the backdrop of the remarkable strides attained in the significant reduction in cases of piracy and sea robbery in our maritime environment.

“Hence, we are fully focused on sustaining the strategic momentum in our fight against maritime crimes and threats,” he added.

According to him, the exercise also seeks to revise the navy’s operational deployments aimed to bolster the influence of its fleets in defence of the nation’s waters.

He added that the CNS will also evaluate all other associated capabilities, such as, logistics support, personnel training and information management mechanisms, among others.

“To this end, the fleet will conduct exercises ranging from anti-piracy operations; protection of offshore oil and gas facilities, fleet manoeuvres and communication and gunnery.

“The fleet will also carry out Maritime Interdiction Operations, such as, vessel board search and seizure, opposed boarding as well as search and rescue operations.

“They will also carry out associated operations to curtail the activities of pirates/sea robbers, oil thieves, pipeline vandals and illegal bunkerers,” he noted.

According to him, the report showed that incidents of sea piracy in Nigeria’s territorial waters reduced from about 41 in 2018; 17 in 2020 and just four cases so far.