The National Drug Law Enforcement Agency (NDLEA), had foiled an attempt by a syndicate to export illicit drugs through the Lagos airport during an outward clearance of passengers on an Ethiopian Airline to Oman via Addis Ababa. 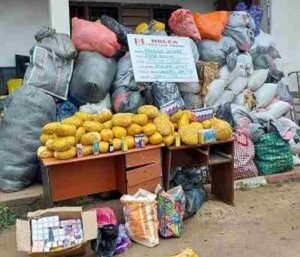 The NDLEA spokesperson, Mr Femi Babafemi, said this in a statement on Sunday in Abuja that a suspect Jonah Chukwuemeka, was arrested in connection to the drugs.

Babafemi said that a total of 1,995 Tramadol tablets with a gross weight of 900 grams hidden in locust beans in his luggage, was intercepted.

He said that the bag containing the illicit substance was handed over to the suspect at the airport by one, Olagunju Abbas, who was promptly arrested.

In the same vein, packs of Tramadol 225mg containing 119,500 capsules were on Thursday transferred to NDLEA by the Nigeria Customs, cargo wing of MMIA.

“The consignment had come in through Ethiopian Airline from Pakistan,” he said.