The National Drug Law Enforcement Agency (NDLEA) has warned customs clearing agents operating at the seaports to desist from the importation and spread of hard drugs in the country. This is even as it partners with the National Association of Government Approved Freight Forwarders (NAGAFF) in the fight against drug abuse at the Lagos ports. 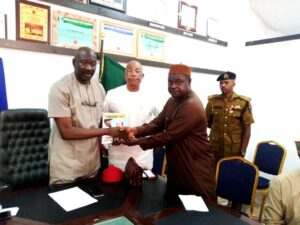 Speaking at a courtesy visit to the National Chairman of the 100 Percent Compliance Team of NAGAFF in Lagos on Tuesday, NDLEA Commander of Narcotics, Tin Can Island Port, Commander, Aminu Abubakar said that the agency is committed to the fight against the menace of importation and abuse of hard drugs at the nation’s ports.

Abubakar said that since the agency launched the War Against Drug Abuse (WADA) in Abuja, several seizures have been made during the course of cargo examination at the ports with many freight forwarders arrested and jailed for being involved or as accomplices.

He stated that from January 2022 till date, the agency has intercepted 1500 Kilograms of Tapendatol which a value of over N6m among others at the seaports. According to him, Tapendatol is another type of Tramadol drug which is more potent and dangerous than the usual Tramadol.

While calling for the cooperation of the NAGAFF 100 Percent Compliance Team, Abubakar stated that freight forwarders should desist from the spread of hard drugs through the seaports but should stick to their legitimate duties by ensuring all loopholes are blocked.

He also informed that the agency’s Standard Operating Procedures (SOPs) which was created in 2006 spells out all necessary information relating to importation and the use of drugs.

In his words: “The agency has different units and strategies through which we fight the menace and monster of drug abuse, drug trafficking into our country. This is the suppression of the supply of drugs which we do at the seaports. We profile some containers at the seaports and base on the profile, we target such consignment and ensure we conduct proper examination. Sometimes we work with intelligence information or on the basis of profile which informs what we do.

“The agency has some strategies such demand reduction area which concerns the counselling of drug abusers and public enlightenment on the effects and prevention of drug abuse. There are also rehabilitation centers. The Chairman of the NDLEA recently launched call centers which would soon be operational, where you can report issues or seek for help. This is what WADA is about.

On his part, the National Coordinator of the 100 Percent Compliance Team, NAGAFF, Alhaji Ibrahim Tanko explained that most freight forwarders become liable to the crime of hard drugs importation because 60 percent of clearing agents at the ports use their company names to import consignments on behalf of the importers. He said about 11 members of NAGAFF have been innocently detained in Prison due to such act.

Tanko however stressed that freight forwarders should desist from using their company’s name to ship in consignments in favour of the importers to avoid being liable when there are infractions. He reiterated the Team’s support to the activities of the NDLEA in fighting against drug abuse in the seaports.

“We have already started this fight from our Importers Association. 60 per cent of our freight forwarders are using their license to import because every one is looking for customers. Instead of allowing the importer to use his name to import, he might bribe you to use your name because he doesn’t have a company. When those containers are shipped they sometimes find drugs in them. There are many freight forwarders who have been innocently jailed due to this. We currently have more than 11 of our members who are in prison. Money is good, but don’t give your company name to ship consignments for someone. It is at high risk.

“There is a need for us to add more strength on this issue of fighting against drug abuse. I assure the commander that we the 100 percent compliance team are greatly in support of the NDLEA and we’re going to ensure we fight vigorously against drug abuse” Tanko concluded.