Nigeria and 28 countries on Wednesday called for an international response to piracy and crude oil theft scourge in the Gulf of Guinea (GoG) and in the continent. 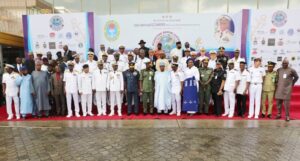 The League of Nations is from Africa, European Union, Brazil, South Korea, China and United States.

Though Nigeria had on March 3 exited the International Maritime Bureau (IMB) piracy list, the country has continued to take the leading role to push for a more secure region.

The call was part of resolutions reached at the end of a two-day International Maritime Conference hosted by the Nigeria Navy at Onne, Rivers.

This is contained in a 36-point communiqué signed by Rear Adm. Saidu Garba, Chief of Policy and Plans, Nigeria Navy, a copy made available to the News Agency of Nigeria (NAN) in Port Harcourt on Wednesday.

The theme of the conference is: “Optimising International Collaboration for Maritime Security and Sustainable Socio-Economic Development in Africa.”

According to the communiqué, 300 delegates and 900 participants from 29 countries, including heads of navies and coastguards in Africa, the EU, Brazil, South Korea, China and United States, among others participated in the conference.

“At the end of the deliberations, 36 draft resolutions were adopted, including that: African countries should identify and prosecute sponsors and collaborators in maritime crimes to serve as deterrence.

“Heads of GoG navies are enjoined to lobby their governments to establish special courts to prosecute cases of piracy, sea robbery and other related offences.

“African states should put in place mechanisms to ensure that resources illegally harvested/exploited in the region, such as stolen crude oil, fish and other resources are confiscated and returned to originating countries.

“This is to ensure speedy dispensation of maritime crimes while emplacing measures to build capacity and sensitise the judiciary on relevant legislations,” it said.

The communiqué further called on GoG states to ensure the operationalisation of the maritime zones within their respective regions in line with the Yaounde Code of Conduct (YCC) framework.

It demanded the development and strengthening of member states surveillance capabilities, to enhance effective information sharing among navies of the GoG.

“As part of their ship renewal initiatives, African nations should leverage the shipbuilding capabilities of member countries, such as Nigeria, to enhance their platform holding.

“African states should carry out flag showing visits with vessels locally built in the GoG to showcase shipbuilding capacity.

“Navies of African states should consider acquisition of dedicated training ships that will be tailored towards their operational needs, particularly at the tactical level.

“African countries should formulate national Blue Economy policies that are uniform in sustainability across the continent,” it added.

The participating countries called on African states to consider establishing National Marine Spatial Planning Authorities/Agencies as well as the establishment of Integrated National Marine/Maritime databases, among other resolutions.