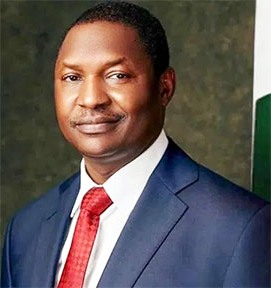 He made the disclosure at the All Progressives Congress (APC) Kebbi South Zonal rally held in Yauri, Yauri Local Government Area of the state.

The minister said: “Before President Muhammadu Buhari’s administration in 2015, Nigeria was spending N1.5 trillion to import rice from Thailand and other countries annually, but the rice revolution introduced by the president put an end to that.

“Today, I am happy to inform you that Nigeria no longer import rice, instead, we export over 800 tonnes of rice annually, off course, this is a great achievement.”

Malami said that Kebbi people had no reason not to vote for APC at all levels, while citing Federal Government appointments to Kebbi indigenes to include; Executive Director, Sokoto River Basin, Managing Director, HYPPADEC, EFCC Boss and Managing Director, Nigeria Ports Authority (NPA), among others.

He listed projects executed by the APC administration in the state to include; road construction from Sokoto to Kontagora, anchor borrower’s programme, social welfare scheme, youth empowerment and survival funds, among others.

The minister appealed to the people of Kebbi to vote for APC, urging, ”they should have trust in all the candidates of the party at all levels to enjoy more dividends of democracy in their respective areas.”

Crowd of APC supporters during the flagg-off of APC Zonal rally in Yauri, Kebbi State on Thursday

Gov. Atiku Bagudu of Kebbi appreciated the former governor of the state, Alhaji Sa’idu Dakingari for accepting to be the Director-General of the state campaign council.

This was due to what he described as fairness during the APC primaries at both state and national levels.

He reminded the people of Kebbi of the need to elect APC at all levels in view of various projects executed, listing them to include; Yauri-Gidan-Zurmi road, Koko-Dabai road as well as electricity project from Yauri to Zuru, among others.

Bagudu, however, acknowledged that there were security challenges bedeviling some areas, adding, ”yet, government has been doing its best to redress the ugly trend.”

In his speech, Dakingari said he rescinded his decision not to participate in politics in 2022 because of the APC gubernatorial candidate in the state.

He added: ”It was also due to the way APC conducted its primaries fairly and transparently at both state and national levels.

“In the case of Tinubu, northerners took an undertaking in 2015 and as Muslims, it is binding on us to fulfill such promise, this is a marriage between the Southwest and the North. Politics is about taking a decisive decision.”

The APC gubernatorial flag bearer, Dr Nasiru Idris promised to consolidate on legacies to be left behind by Bagudu in the areas of security, education, water supply and youths empowerment, among others.

While describing APC as a party to beat in Kebbi, the gubernatorial candidate urged the electorate to elect APC at all levels

Earlier, the Kebbi APC Chairman, Alhaji Abubakar Kana-Zuru urged the electorate to elect APC in all positions to sustain the provision of the dividends of democracy.

He said that Bagudu’s administration had touched the lives of people in all segments, adding, ”hence, there is the need for people to reciprocate the gesture by voting for the party’s candidates at all levels.”