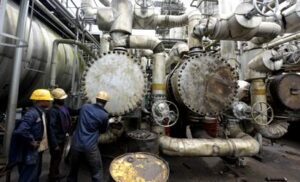 The production volumes are exclusive of condensate oil which is not part of OPEC reporting requirement.

A new report by the Nigerian Extractive Industries Transparency Initiative, NEITI, showed that total oil production in 2019 was 735.244mmbbls, representing an increase of 4.87 percent over the 701.101mmbbls recorded in 2018.

The report showed that Production sharing contracts, PSCs, contributed the highest volumes of 312.042mmbbls followed by Joint Venture (JV) and Sole Risk, SR, which recorded 310,284mmbbls and 89.824mmbbls respectively. Others are Marginal Fields, MFs, and Service Contracts, SCs, which accounted for 21,762mmbbls and 1,330mmbbls respectively.

Read Also:  10 Things You Need To Know About The Petroleum Industry Bill

The report also showed that total crude oil lifted in 2019 was 735.661mmbbls, indicating a 4.93 percent increase to the 701.090 mmbbls recorded in 2018, with companies lifting 469.010mmbbls, while 266.650mmbbls was lifted by the Nigeria National Petroleum Corporation (NNPC) on behalf of the Federation. Analysis of crude oil lifted by NNPC showed that 159.411mmbbls was for export, while 107.239mmbbls was for domestic refining.

97 percent of the volumes for domestic refining (104.475mmbbls) was utilised for the Direct Sale Direct Purchase, DSDP, programme while the remaining 3 percent (2.764mmbbls) was delivered to the refineries.

According to the report, total crude oil production in 2017 was 690mmbbls, an increase of 4.5 percent over the 2016 production volume.