Japanese carrier NYK, part of ONE, has declared General Average on the NYK Delphinus, which suffered an engine fire a fortnight ago and is currently berthed at the US west coast port of Oakland. 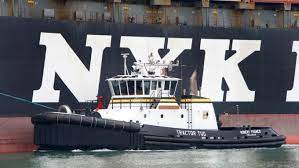 “On 14 May, NYK Delphinus experienced a fire in the engine room prior to her arrival in Oakland. Salvage services were requested by the owner, and the fire was swiftly brought under control and has been extinguished.

“Now, General Average is formally declared by the owners of the vessel,” ONE said today.

NYK has appointed Greece-based Oceana Marine Claims & Adjusting and Marine Adjusting Solutions as the average adjustor, which “will be responsible for coordinating the collection of General Average securities and all documentation required from parties with interest in cargo onboard, containers, vessel, and vessel fuel”.

Read Also: 2021 Shaping Up for a Boom Year in Newbuilding Orders

The 4,900 teu vessel was en route from Vancouver and around 50 miles offshore from Monterey when the fire started.

The US Coast Guard responded to a request for assistance and said that its crew brought the fire under control as tugs towed the ship towards Oakland, its destination port.

According to the eeSea liner database, the vessel is one of eleven 4,800-5,100 teu ships deployed by ONE on the AL5 service – which connects the west coast of North America with the US east coast and Europe via the Panama Canal.

CMA CGM is a slot-charterer on the service, which it markets as the California Bridge.