2021 Shaping Up for a Boom Year in Newbuilding Orders

Ship owners’ appetite for newbuildings seems unabated during the first few months of 2021, after the past lackluster years of relatively limited investment. An expected rebound in freight rates has also triggered more deals in the newbuilding part of the market. 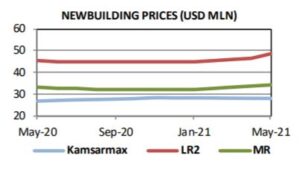 In its latest weekly report, shipbroker Allied Shipbroking said that “a week with few but interesting moves took place in the dry bulk newbuilding market. The recent correction in freight rates has not trimmed expectations or appetite significantly, at least for now. The overall bullish sentiment in the sector and the positive outlook for the demand and supply fundamentals are anticipated to retain the newbuilding market at relatively active levels. However, the current “expensive” prices have been keeping things at moderate levels in the year so far, considering the encouraging earnings being noted. We expect interest to remain vivid in the coming weeks, while focus will continue to hold more so for the more versatile size classes. On the tanker front, we witnessed some significant business taking place in the chemical subsegment this past week, while things in the crude oil tanker space remained silent. As long as the highly anticipated market recovery refrains from showing its face, we do not anticipate any excessive surge in activity to take place. The uninspiring freight earnings, the persisting low demand levels and the current newbuilding prices on offer are all factors which are significantly trimming appetite for the time being. We expect business to remain minimal over the coming weeks, with prospects for improved activity being shifted now for later on in the year”.

In a separate note, shipbroker Banchero Costa added that “in the container market, more orders were recorded during the week. Sinokor agreed with Hyundai Mipo for the construction of 4+4 optional gearless feeders (abt 1800 TEU). Vessels to be delivered during 2022- 2023. Also in feeder segment German Owners Vega Reederei signed with Yangfan group four 1,868 TEU feeders basis delivery starting from end 2022. Vessels to be SDARI Sealion design and each should be priced at around $23 million each. MSC added two more ULCC (abt 24,200 TEU) at Hudong Zhonghua and Jiangnan shipyards. Vessels to have a cost of $150 million basis delivery end 2023.

Vessels to be leased by ICBC Financial Leaging and CSSC Shipping Leasing. In the tanker sector, Chinese owners Zhejiang Henyi Petrochemical placed an order for 8x MR2 tanker at GSI shipyard basis delivery starting from Q1 2023. Vessel to have a cost of $34.7 million each. Essberger has ordered 4+4 optional 6600 dwt LNG dual fuel STST chemical tanker at CMHI Jinling (Dingheng). Vessels to be ice class 1A”.

Meanwhile, in the S&P segment, Allied noted that “on the dry bulk side, it was another bullish week, in terms of transactions taking place. As already stated, the overall positive sentiment has adequately supported SnP volume for many months now. Moreover, thinking about the current trends both in terms of freight rates and asset price levels, it seems that recent activity levels will be sustained in the upcoming period. During the past week, we saw a higher focus in the smaller size segments (especially for Handies), with activity though varying across different age groups. With all that being said, we can expect the current buying appetite to further support the current overall sales momentum being noted. On the tanker side, another interesting week was due, given the good flow of transactions coming to light. Undoubtedly, the highlight of the week was the massive en bloc sale of 6 VLCC resale units with dely within Q1 ‘22 and Q1 ‘23. Moreover, with other size segments following closely, we can expect many fresh deals to come to light”, the shipbroker concluded.