Some members of the Organized Private Sector (OPS) operating in the nation’s maritime industry have knocked the Central Bank of Nigeria (CBN) over its recent decision to stop forex sales to Bureau De Change (BDC) operators. 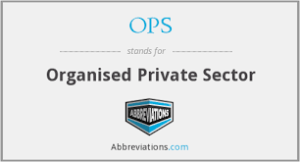 Members of the OPS lamented that the action will hinder importation and as well lead to inflation which in return will hamper the economic growth of the country.

Recall that the CBN had ban sales of forex to BDC operators last week after the Monetary Policy Committee (MPC) meeting, which was held on July 27, 2021.

While some stakeholders have applauded the CBN’s stand given the wider long-term benefits on the economy, others have responded to the policy as one capable of hampering the nation’s economy.

Speaking to Shipping Position Daily, the Executive Chairman of Alaba International Market’s Electronics Section; Mr Paulinus Ugochukwu, in a chat with our correspondent, said the ban is not in the interest of the economy.

He said that the banks are not liquid enough to provide foreign exchange to importers and added that lack of forex will lead to inflation; owing to scarcity of forex to import.

In his words: “Every importer needs forex, the policy is not favourable to the importers and the economy, because it has made the dollar to increase, because there will be high demand of dollar”. “Assuming the government can give BDC operators enough money every week, if we have many BDC operators, it gives room for competition and this will make them bring the price down, if for instance they are giving BDC operators $40,000 every week, each operator will want to quickly sell its own and get another, because when you have too many competitors in the market, you will bring your price down, but with this policy it will be difficult for importers to import goods, and this will affect the economy”.

Also speaking, a clearing agent and Vice President, Association of Nigeria Licensed Customs Agents (ANLCA), Kayode Farinto, opined that the CBN’s ban is not the best way to handle the situation.

He also said that the banks are not liquid enough to supply dollars to those who need it, informing that over 50 per cent of foreign currencies in the country are in the hands of individuals and banks have less than 20 per cent. He further said that the move will bring about artificial scarcity of forex in the country due to lack of forex to import.

“So the only thing that will happen is artificial scarcity. You are indirectly giving BDCs power to increase the exchange rate. In the next one month, it will go up to N1000 because even the CBN that is supposed to regulate this, how many dollars does it have in its stock?

“If you have the dollars in your storage, that is when you can cushion the effect of scarcity and give to genuine people who want to import. The CBN itself does not have the dollars,” he pointed out.

Also speaking, the National President, Africa Association of Professional Freight Forwarders and Logistics in Nigeria (APFFLON), Otunba Frank Ogunojemite, noted that Nigeria being an importing nation, banning sales of forex to BDC operators will not be in the interest of the economy, while stating that the ban will bring about inflation and scarcity in the country.

On his part, the Vice President of the Manufacturers Association of Nigeria (MAN), Mr, John Aluya, said the ban of forex sales to BDC operators will be in the overall interest of the economy, stating that the BDC operators have misused the opportunity given to them, he noted that Nigeria is the only country where the apex bank funds the BDC operators.

He said, “I think the ban is in the interest of the economy because the BDCs have misused the process and it is only in this country that you see Central Bank funding BDC operators; no other place in the world; everywhere in the world BDC source their fund and sell.

“To that extent, I think the policy is a right move that will help the economy, because people are just doing round-tripping, one person owing two or five BDCs, some even own more, what do they need that for, if indeed they want to do business, why do they need more than two licenses, and they are doing this just to collect money from CBN. I believe in the long run it’s going to be beneficial, I know every new policy will have its own challenges. I know there is going to be a lot of challenges, but I believe it’s going to stabilize and the rate will become more and more stable, the gap will be narrowed, it won’t be as big as the one from N400 to N500 as we have it” he said.