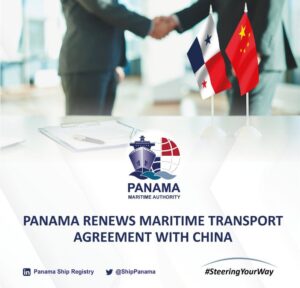 This agreement came into force July 20, 2021, at the end of the renewal process between the Panamanian and Chinese authorities. However, in order to avoid interrupting its implementation it was considered that from May 17, 2021 until its entry into force, both parties would continue to benefit from its provisions.

The agreement renewal will be extended to five years, up from 3 years, and will strengthen trade relations between the two nations, and Panama Ship Registry‘s commitment to its users entering ports located in the People’s Republic of China.

The renewal of this Agreement represents a series of unique advantages for shipowners who have registered their vessels under the Panamanian flag.

The Panama merchant fleet’s vessels will maintain the same uninterrupted port tariffs benefits and preferential treatment in the ports of the People’s Republic of China, reaffirming the status of “Most Favored Nation”.

This Agreement on Maritime Transport is based on equality, mutual benefit, freedom of navigation and the principle of non-discrimination for Panama-flagged vessels operating in Chinese ports.