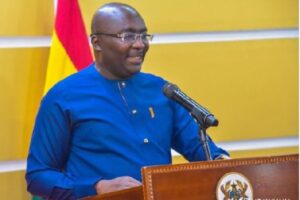 He, therefore, urged regional and continental navies and security agencies to step up collaboration of inter-agency procedures, enhance information and intelligence-sharing to tackle the insecurities in the Gulf of Guinea.

He said the increasing incidences of piracy and kidnapping for ransom in the Gulf of Guinea by the Pirate Action Groups and organised crime groups were threatening regional and continental trade and called for concerted efforts by stakeholders to halt the menace.

Vice-President said this at the opening of the Second Edition of the International Maritime Defence Exhibition and Conference in Accra on Wednesday.

The three-day programme is on the theme: “Maritime Security and Trade: the Nexus between a Secure Maritime Domain and a Developed Blue Economy.”

It brought together more than 300 delegates from 70 countries in Africa, Europe and Asia to discuss and network towards tackling the challenges in the maritime sector for sustainable exploitation of the blue economy.

Vice President Bawumia said it was important for regional navies to work through coordinated maritime law enforcement to suppress insecurities in the sector.

He urged the maritime security architecture to dismantle the piracy and kidnapping for ransom networks and unravel the identity of the negotiators and facilitators of the crime.

The Vice President said government was acquiring offshore patrol vessels, fast patrol boats and crafts for the Navy as well as provide funding for the timely completion of the Forward Operating Base at Ezinlibo in the Western Region to protect Ghana’s maritime territory.

Reports along the Gulf of Guinea in recent times signal a surge in attacks by Pirate Action Groups with most incidents occurring along the coasts of Cameroon, Nigeria, Benin and Ghana.

A total of 79 actual and attempted attacks were recorded in 2020 representing 34 per cent increase over that of 2019, which recorded 59 attacks.

Similarly, there was a rise in kidnapping for ransom and hostage-taking. For instance, 22 separate attacks were recorded in 2020, with 130 out of 135 persons kidnapped globally reportedly abducted in the Gulf of Guinea alone.

That represents 95 per cent of all kidnapping cases with Nigeria recording 62, Benin 29 and Ghana six.

Vice-President Bawumia noted that the situation had become even more precarious considering that over the past two months, about 10 crew members of two Ghanaian-flagged fishing vessels were abducted in separate incidences along the Gulf of Guinea.

He said 2021 had begun with challenges with the first half witnessing greater piracy threats and activities with more than 30 cases recorded.

Those incidences led to some renowned maritime security institutions issuing warning notices to all vessels plying the Gulf of Guinea, which he said was detrimental to the security and economic interest of the Region.

Vice President Bawumia expressed worry over the evasion of counter-piracy measures by the criminals, making them emboldened, thereby scaling up the insecurity and threat profile in the coastal nations.

Read Also:  Holding Ever Given As A Bargaining Chip Was An Error

More disturbing was a report from the Centre of Maritime Law and Security Africa indicating that Kidnapping for Ransom has developed into an ‘Improved Business Module’, which attracted criminal groups to shift from theft and robberies, he said.

“I am informed that the network, which sustains this module of piracy, is larger than the traditional case of piracy of cargo stealing,” Dr Bawumia said.

“This network now involves negotiators, intermediaries, facilitators and racketeers as well as individuals acting in official or professional capacities such as insurance and risk analysts, professional negotiators and security companies.”

“These new dimensions bearing on insecurities in the maritime domain is a wakeup call that, indeed all of us gathered here have a lot of work to do.”

He said the maritime sector was the pillar of the Ghanaian economy as the ports serve as the gateway for over 80 per cent of international trade and a source of revenue to the State.