Home » Privatization of Daewoo Shipbuilding is Priority for Korea

Speaking with reporters today the new chairman of the Korea Development Bank said the efforts to sell Daewoo Shipbuilding and Marine Engineering (DSME) to private investors is one of the bank’s top priorities. The state-run financial institution has been the largest investor in the financially troubled shipyard for more than 20 years. 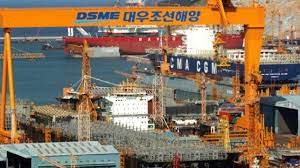 Chairman and CEO Kang Seog-hoon was speaking at a press conference with reporters marking his first 100 days as the leader of the government institution used to invest in Korean industry both to support development and promote businesses. KDB also invests in financially troubled companies during their reorganizations to support the companies’ return to stability and financial health. Kang was outlining his priorities and the challenges he sees for Korean business.

DSME is KDB’s last investment in the shipbuilding sector after the financial institution completed the sale of several smaller shipyards to private investment groups. At the beginning of September, it was reported that they had finalized the sale of Daehan Shipbuilding. Last year, several other mid-sized shipyards were also sold including the remaining interest in the former STX.

KDB first became involved with DSME in the late 1990s during a reorganization of the shipyard. In 2000, they became the largest shareholder with a position that accounted for 49 percent of the equity in the shipbuilder. Seventeen years later, in 2017, DSME completed a debt swap arrangement with KDB which saw the bank’s position increase to 79 percent (if all the options are exercised) as part of a $2.8 billion recapitalization of the shipyard. DSME’s corporate value however is reported to have declined from $4.8 billion when the bank first suggested its privatization in 2008, to a valuation of approximately $1.2 billion as of 2019.

The Korea JonhAng Daily reports that Kang said the shipyard “requires a lot of research and development and new investment,” with these investments best coming from private investors. He also told the reporters that finding new investors for DSME could help to raise management efficiency for the shipyard as a way to “save DSME,” which remains one of Korea’s big three in the shipbuilding sector.

KDB has been studying different possible exit routes for its investment in DSME for the past several years. They supported the proposed merger that would have seen the shipyard become part of Hyundai Heavy Industries. After the EU effectively blocked the merger, KDB has reportedly been looking for a new private investor and the situation has been accelerated by new financial challenges at the shipyard which grew worse during a 51-day strike by subcontractors this summer.

The Korea Times reports that Kang is pushing for the successful sale of DSME “as fast as possible.” Discussing the options, the head of KDB however said it would not be possible to split the shipyard into its commercial and government work and sell the two sections separately. Speculation recently focused on the possibility of breaking DSME up to facilitate its sale.

Speaking of his long-term strategy, Kang said that he is pushing forward with a plan to move KDB’s headquarters from Seoul to Busan to place it closer to the largest port and key industries including the shipbuilders. The government and the bank have announced plans to invest in Korean industry including major efforts to support the transition of the shipbuilders to new technologies and support their leadership in green technology and automation. Kang said the bank will also invest more than $20 billion into the semiconductor industry over the next five years.