Home » QUESTION OF THE WEEK: What Is a Bill of Lading?

QUESTION OF THE WEEK: What Is a Bill of Lading?

A bill of lading (BOL) is a legal document, issued by a carrier, that contains all the information it needs to correctly move a shipment, including the type, quantity and destination for the cargo. 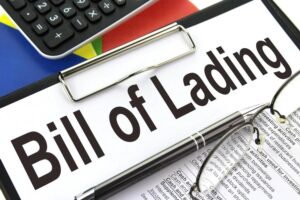 The bill of lading names the three parties who are crucial to the shipping process:

Investopedia calls the bill of lading “perhaps the most important document in shipping”. In order to understand why, you first need to have a solid grasp of the three parties named on a bill of lading.

The shipper on a bill of lading is the person who is responsible for packing and preparing a shipment to turn over to the carrier for transport.

For example, this might be a supplier who is sending your company parts for use in your manufacturing processes. Or, if you’re buying goods from a vendor in China that you plan to resell in the United States, if that vendor is packing and preparing the shipment for transit via ocean freight, that person will be the shipper on your bill of lading.

Why this term can cause confusion: Many people new to logistics confuse the terms shipper and carrier. For example, you might hear someone call UPS “the shipper.” Let’s clear this up by talking about the role that an entity like UPS actually plays.

The carrier is the party that actually moves your cargo.

UPS is a carrier, for example. Steamship lines, truck lines and airlines—these are all carriers who own and operate transportation equipment.

The vendor who packed the shipment would be the shipper, who then . . .

Passes the cargo onto the carrier: the steamship line.

Then, this carrier will ultimately deliver the shipment to the third party in the agreement:

This final term is probably the least intuitive of the three.

All consignee means, though, is the person who’s designated to receive the shipment.

For example, let’s go back to the example of a supplier (the shipper), sending you parts via a steamship line (the carrier), which are intended for your company (the consignee), who will use them in their manufacturing processes.

If you’re curious, the term originates from the concept of consigning, which Merriam-Webster simply defines as: “to give, transfer, or deliver into the hands or control of another.” In the arrangement, you have:

A consignor, the party who hands over the goods, and

A consignee, the party who ultimately receives these goods.

How this term can cause confusion: In some scenarios, the consignee is not the person paying for the freight.

Take the example of a company who supplies mini shampoos and conditioners for hotels. Instead of charging its customers separately for freight, the supplier simply builds shipping into their overall cost. So when they need to send a shipment to one of their hotel customers:

The supplier pays its freight forwarder to deliver the shipment to the hotel.

However, the hotel would still be the consignee. Even though the hotel isn’t paying for the freight, they’re still receiving the shipment.

Now that you understand the three main parties named in a bill of lading, let’s talk about why it might be considered the “most important document in shipping.”

Why Is a Bill of Lading So Important to the Shipping Process?

As we mentioned earlier, a bill of lading is a legal document. It outlines the obligations and responsibilities of each of the three parties involved in a transaction.

In its role as a legal document, the bill of lading serves three broad purposes:

Acknowledges receipt of cargo by the carrier: In other words, the BOL is proof that the carrier has taken control of the goods from the supplier.

Provides evidence of “contract of carriage:” In plain language, the bill of lading documents the agreement between the shipper and the carrier for the transport of the freight.

Acts as the “document of title:” In other words, the bill of lading proves the ultimate ownership of the goods.

Given these important functions—and the legal weight of the document—make sure you check all of the information on your bill of lading carefully before signing it.

Decoding the Terminology of Logistics

As with many specialized industries, logistics has its own set of terminology. Many of these terms can be confusing to newcomers. (Take “drayage,” for example!) By walking you through the main points of a bill of lading, we hope we’ve cleared up any confusion around this critical document. We also hope we’ve made it easier for you to understand the parties and responsibilities involved in your next shipment. If you’re looking for more information about the terms you hear when shipping freight, check out our glossary of common transportation and logistics terms.