QUESTION OF THE WEEK: Who Are The World’s Ten Richest Ship Owners

Have you ever wondered who’s behind those acres of colourful containers that cross the oceans daily in their hundreds of thousands? The shipping industry may be seeing a slump right now due to overcapacity – TMT Group even filed for bankruptcy recently – but the guys and girls at the top of the business are still enormously wealthy. Let us introduce you to the top 10 richest shipping magnates today. 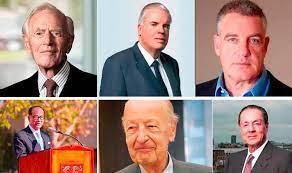 A true household name in shipping, Moeller-Maersk is a global conglomerate with nearly 90,000 employees. The family has built its vast fortune on owning and operating container ships and ports, as well as being heavily involved in logistics, oil and gas.

Widow of the late billionaire Andronico Luksic, Chilean Iris Fontbana inherited her Croatian husband’s fortune in 2005. The family’s key wealth stems from Antofagasta, the world’s biggest copper mine Andronico founded in the eighties. The family has mining ventures all over the world, as well as interests in energy, transportation and port services, and they own two chains of Croatian holiday resorts.

Described as ‘the perfect businessman’, Kuok bought the rights to bottle Coca-Cola in China in 1993, so his staggering fortunes isn’t purely down to shipping by any means. Aside from his shipping interests he is also involved in mining, trading, real estate, hotels and publishing across much of South East Asia and Australasia. Kuok is the richest man in Malaysia.

Norwegian-born John Fredriksen holds a Cypriot passport, lives in London and owns the world’s largest oil tanker fleet. He joined the shipping industry in the sixties when he started trading oil in Beirut, and bought his first tankers in the nineties. He is involved in container shipping through significant investments with the travel group TUI AG, a major shareholder in Hapag-Lloyd. Fredriksen holidays in Marbella.

The family known for Dr Oetker frozen pizzas as well as baking products and yoghurts, owns the Hamburg Süd shipping company as well as a bank, a publisher, breweries, hotels and an insurance organisation. The Oetker Group conglomerate also owns Brazilian and Spanish shipping outfits as well as having taken over several other shipping companies over the decades. Hamburg Süd containers are a distinct bright red.

Klaus-Michael joined the family’s logistics company, Kuehne & Nagel in 1963 and three years later he was crowned CEO. These days he is retired from the shipping world, but retains a whopping 53 percent of the company which specialises in sea and air freight as well as IT-based logistics.

Gianluigi Aponte and his wife are the proud owners of MSC, the second largest container shipping line in the world, with over 400 vessels to their name. Gianluigi started his career as a ferry captain in the 1960s, and a decade later launched Mediterranean Shipping SA with his wife Rafaela.

Israeli Londoner Idan Ofer is the CEO of Quantum Pacific Group, whose key interest is in the world’s largest private shipping lines. He is also the principal shareholder of Pacific Drilling, which went public on the New York Stock Exchange about two years ago. Idan Ofer recently donated £25 million to refurbish the London Business School, where once studied.

Idan’s brother Eyal is chairman of Zodiac Maritime Agencies, a shipping line with a fleet of over 130 vessels. He also holds interests in both Royal Caribbean Cruise lines and OMNI Offshore Terminals. His vast property assets across the world include two prestigious New York addresses – 15 Central Park West and the Altria skyscraper. In 2013, Eyal donated £10m to the Tate Modern in London, for refurbishment purposes.