The company has been in talks with the Chinese Government to hand over assets owned by the Ningbo plant early next year. 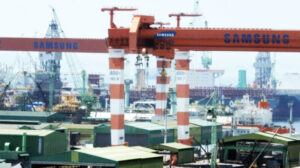 Shipbuilding company Samsung Heavy Industries (SHI) is set to close its Chinese plant in Ningbo as outdated facilities have triggered a decline in its productivity.

Established in 1995, the Ningbo plant is focused on the production of ship blocks with iron structures as well as shipbuilding for overseas and domestic markets.

It has produced and supplied nearly 200,000 tonnes of ship blocks per year.

As reported in The Korea Herald, the company has been in talks with the Chinese Government to hand over the land as well as other assets owned by SHI Ningbo early next year.

Workers at the yard have gone on strike to protest the decision, saying that the current compensation plan offered by the company is inadequate.

The shipbuilding company is planning to focus on the operations at its Rongcheng unit after closing the Ningbo plant.

By selling new shares, as well as an apartment complex for its workers near Geoje shipyard in Seoul, SHI is planning to also raise funds for the development of eco-friendly shipbuilding technologies.

In February, the shipbuilder won an order for five 15,000 twenty-foot equivalent (TEU) liquefied natural gas (LNG)-powered container ships from a client in Asia.

The total contract value was approximately $708m and the container ships are planned to be delivered in sequence, starting from July 2023.

The vessels will use LNG as their main fuel to comply with regulations on harmful gas emissions, such as sulphur oxides and carbon dioxide.