A warning that the shipping industry will soon face the potential impact on General Average recoveries of tighter rules on emission prevention has been delivered in the chairman’s address to the Association of Average Adjusters. 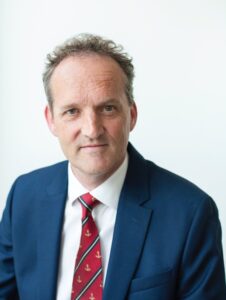 Michiel Starmans (chairman for the 2020-2022 term) called for heightened awareness of what planned new levies under green transition measures could mean for assessing allowances in ship casualties. He devoted much of his address to the Association’s annual conference in London on May 12, 2022, to considering such consequences of what he called “the biggest challenge for mankind in the next 25 years, which is combating climate change.”

High-level legal and insurance deliberations have yet to focus on whether air pollution and emissions from ships should be allowable in General Average, the principle that all stakeholders in a “maritime adventure” share damage or losses resulting from the voluntary sacrifice of part of a vessel or cargo to save the whole of such property and/or the expenditure incurred while deviating to a port of refuge for the common safety of ship and cargo. The need to account for air pollution and ship emissions was not foreseen by leading experts in 1994 who in a major review of GA allowed the costs of preventing environmental pollution, said Mr Starmans, who is director of the legal department at Amsterdam-based Spliethoff Group.

The International Maritime Organization aims to reduce carbon intensity to 11% by 2026, followed by an overall reduction of 40% by 2030; while the European Commission more ambitiously has agreed to extend to the shipping sector the European Union Emission Trading Scheme (ETS) in support of an intermediate aim of a 55% reduction in greenhouse gas by 2030.

The question arose, said Mr Starmans: “Can the new carbon levies consequent on a General Average act be allowed in GA?” His answer was: “Based on cross references of existing and future maritime legislation, I believe carbon levies under ETS and IMO can be allowed in GA as a direct consequence of bunkers consumed and allowed in GA.” Mr Starmans conceded that some might see that conclusion as an opportunistic attempt to increase GA allowances, but it might be considered too in the context of recent statements in court rulings by senior maritime judges.

Under proposed legislation, CO2 emissions in shipping will no longer be “free of charge,” emphasised Mr Starmans. The goal is to spur the maritime industry to invest in energy efficiency and switch to cleaner fuels with fewer emissions.

The phased lowering of an emission cap on total greenhouse gas emissions by participants, combined with the rising costs of purchasing carbon levies means that climate costs will rise year on year, and the levies might eventually exceed the costs of bunkers for vessels which have not switched to low carbon fuels, said Mr Starmans.

The EU which wants to see zero emissions by 2050 has a package of measures which is subject to review by the European Parliament and requires approval by each member state. It includes an ETS, which would compel shipping companies as from 2023 to buy permits for ships of over 5,000 gross tons to cover each ton of CO2 emission. The cap on emissions, which would be converted into tradable carbon permits, would rise in annual stages from 20% in 2023, to 100% in 2026.

If the company does not surrender the right number of permits by April 30 of the following year, it would be fined 100 euros per ton of CO2 not accounted for. Ships can be denied entry to EU ports where the responsible shipping company has failed to surrender permits for two consecutive years.

The relevance for adjusters of these future carbon levies could arise when a vessel is removed for repairs or when GA allowances are made for fuel consumed during deviation to, or detention at a port of refuge until regaining course under the applicable York Antwerp Rules, which regulate GA and are nearly always incorporated in any charterparty or bill of lading.

At present, in a General Average deviation to a European port of refuge to carry out necessary repairs for the safe prosecution of the voyage, emission did not need to be compensated by the shipping company, but from January 2023 this “free ride” was about to change, said Mr Starmans. The shipping company would have to settle the bill with the relevant EU member state, which posed the question whether the shipowner (or time charterer) could recover these additional costs in GA.

On the EU tax on fuel Mr Starmans did not foresee any problems in allowing in GA the gross fuel price, including the EU tax, where at present the York Antwerp Rules allowed the net fuel price.

Mr Starmans hoped that his scrutiny of whether additional costs might be recovered in GA would be a starting point for a formal Opinion to be delivered by the advisory committee of the Association “once legislation has been finalised and adjusters will be faced for the first time with the implications of the emission levies.”

Mr Starmans is succeeded as chairman for 2022-23 by Sir Nigel Teare.

The Association of Average Adjusters promotes professional principles in the adjustment of marine claims, uniformity of adjusting practice, and the maintenance of high standards of professional conduct. Irrespective of the identity of the instructing party, the average adjuster is bound to act in an impartial and independent manner. The Association plays an important part in London insurance market committees and has strong relationships with international associations and insurance markets.