The Group Executive Vice Chairman, SIFAX Group; Dr. Taiwo Afolabi, has described the death of Olowu of Owu kingdom in Ogun state, Oba Adegboyega Dosunmu, Amororo II, as a great loss to the company and the nation. 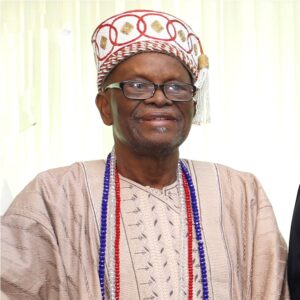 The monarch, who died at the weekend, was the Board Chairman of SIFAX Group.

Afolabi according to a press statement issued on Thursday by the Corporate Affairs Manager of SIFAX Group, Mr Muyiwa Akande, the company will miss the fatherly counsel of the monarch, who under his chairmanship, the company experienced phenomenal growth in various sectors like Maritime, Aviation, Oil & Gas, Logistics, Hospitality and Financial Services, among others.

Afolabi said: “Kabiyesi was not only a father to me, but also a source of inspiration for us as a company. Being the board chairman of a large corporation like ours comes with a huge responsibility, but despite his age, we found his contribution and counsel very useful. His experience came handy either when expanding existing business or foraying into a new territory.

“He has left a leadership vacuum that would be difficult to fill for us as a company. His impact as an influential traditional ruler in the country would certainly be felt. I extend my condolences to his beloved family, the Owu kingdom and the people of Ogun state.”

Oba Dosunmu studied Drama and Television Production in 1963 at the Hendon College of Technology in London and also obtained a bachelor’s degree in Theology from the Landmark Baptist College Tennessee, USA in 1987.

The late monarch ascended the throne in 2005 after a sterling civil service career that included serving as the Head of Drama department at the Nigerian Broadcasting Corporation. He was also the producer of the popular television series of the 1970s, ‘Village Headmaster’, which holds the record as Nigeria’s longest running television series. The TV programme was on air for over 20 years.

He joined partisan politics and was elected the Chairman of Abeokuta Local Government in 1976.