Home » Smuggler Charged With Assault After Interdiction Off Puerto Rico

Smuggler Charged With Assault After Interdiction Off Puerto Rico

The crew of the Coast Guard Cutter Winslow Griesser offloaded 330 kilos of cocaine in San Juan, Puerto Rico, after interdicting a smuggling vessel in the Mona Passage. 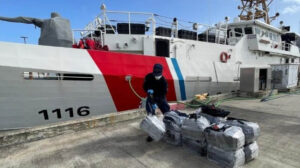 On the night of September 26, the crew of a Customs and Border Protection aircraft spotted a suspected go-fast vessel in waters northwest of Desecheo Island, Puerto Rico. Coast Guard Cutter Winslow Griesser followed in pursuit, and the smugglers jettisoned bales of suspected contraband into the water. The Winslow Griesser stopped the suspect vessel, detained the four men aboard and recovered 12 bales of the jettisoned contraband from the water. The bales later tested positive for cocaine worth approximately $6.5 million.

The four men aboard the boat claimed to be Dominican Republic nationals, and they face prosecution in Puerto Rico on charges of drug-smuggling in U.S. waters. The charge – possession with intent to distribute – carries a minimum sentence of 10 years in prison and a maximum of life.

At least one also faces charges of assaulting federal officers with a deadly weapon, which carries a maximum sentence of 20 years imprisonment.

The Winslow Griesser is a fast response cutter homeported in San Juan. In August, she was in collision with a fishing vessel off the coast of Puerto Rico, resulting in the death of one fisherman. An investigation into the casualty is under way.