Stakeholders in the nation’s maritime industry have expressed divergent views about the recent Federal High Court dismissal of the suit seeking for tenure elongation for members of the governing council of the Council for the Regulation of Freight Forwarders in Nigeria (CRFFN). 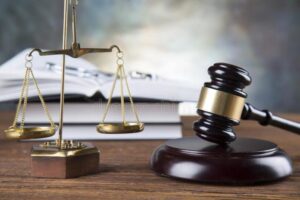 Shipping Position Daily recalls that the Judge, Justice N.E Maha in the Certified True Copy of the judgment, which was obtained by our correspondent, dismissed the suit for lacking merit and also declared that the interpretation of the Act of the CRFFN allows only for two years’ tenure and not four years.

In a chat with the Secretary-General of the National Council of Managing Directors of Licensed Customs Agents (NCMDLCA), Mr. Festus Ukwu expressed displeasure with the Court ruling, even as he termed it to have some shady political backings. He said there were some “unseen” hands behind the whole process whose aim is to position themselves.

In his words: “I am sure that court dismissal is political. I don’t expect that dismissal. I don’t know why they should dismiss the suit. It was a big surprise. I know the first tenure of that Council was two years for both the first and second term. Now, in this case, I don’t know why they should say it should be just one term. There are political mitigations going on in this issue which is not proper.

“I am sure it was some unseen hands that operated on that issue. Otherwise, I don’t see why they should start planning for another election. For what? No problem, we are going to see the outcome. There are a lot of people’s handwriting and positioning for that particular issue”, Ukwu alleged.

On his part, the National Secretary of the Association of National Licensed Customs Agents (ANLCA), Mr. Babatunde Mukaila said the court ruling is clear enough and should be followed to the letter. He said, with the ruling, all controversies as to the number of years to be spent by the Council members have been clarified.

According to him, “a Court ruling is binding and it’s very democratic that the plaintiff went through litigation. I believe that aspect is settled” Mukaila said.

Shipping Position Daily recalls that the Congress of Registered Freight Forwarding Practitioners of Nigeria (CREFFPON) had earlier in a statement signed by Pastor Edwin Chukwudire Obi, alleged that the embattled ex-members of the CRFFN governing council have been meeting to either appeal the judgment or negotiate their re-emergence as council members.

“Therefore, it is the candid opinion of the CREFFPON that these intending moves by the larger components of the supposedly elected leaders of the freight forwarders is purely self-seeking and not for the common good of the freight forwarding Profession and Practitioners” the statement reads.

The body however urged the CRFFN Registrar and management “to further, enforce the administrative processes for the immediate recovery or returning back of the Council’s vehicles in their possession back into the pool, which was one of the contemplated fears on the part of the said elected officers, that actually triggered the court action, abinitio”.

All attempts to speak with the National President of the National Association of Approved Freight Forwarders (NAGAFF), Chief Increase Uche who, in the company of the incorporated trustees of the Association of Nigerian Licensed Customs Agents (ANLCA) and one Bamidele Azeez, had gone to court against the Registrar of the Council; Barr. Sam Nwakohu, the Minister of Transportation; Mr. Rotimi Amaechi, and the Chairman of the Council, Col. Tsanni Abubakar (rtd), proved abortive.