Stakeholders Kick Against Navy Planned Return To Ports, Say It Will Increase Cost Of Cargo Clearance At Nations’ Ports

Stakeholders in the nation’s maritime industry have faulted the decision of the Federal Government to return the Nigeria Navy back to the seaports. 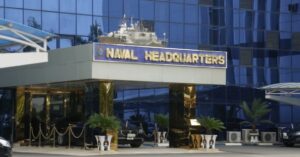 Already, freight forwarders are arguing that the move will lead to increase in cargo clearance time, even as other stakeholders also state that the return of Navy will further lead to diversion of Nigeria-bound cargoes to neigbouring countries like Ghana, Togo and Benin Republic.

Director General of the Lagos Chambers of Commerce and Industry (LCCI) Dr. Muda Yusuf, had in a recent exclusive chat with Shipping Position Daily, disclosed that Nigerian exporters were relocating to neigbouring ports due to the stifling condition and the multiple government agencies at the ports.

Checks by Shipping Position Daily, revealed that the Vice President and Chairman of the Presidential Enabling Business Environment Council, Professor Yemi Osinbajo, had in 2018 directed the Nigerian Ports Authority (NPA) to ensure that only eight Federal Government agencies are allowed to operate and have physical representation at all port locations in the country.

However, the Chief of Naval Staff, Vice Admiral Awwal Gambo, recently during a webinar to mark the 100 days of the service chiefs in office, said that the Navy has secured the approval of the Federal Government to return to the ports, 30 years after it was kicked out.

The Chief of Naval staff had informed that the government wanted the Navy back at the seaports to check the indiscriminate entry of small arms.

“We have realised that arms are circulating indiscriminately and their effects are devastating. Our efforts in combating their proliferation must therefore be viewed as contributing to the good, rather than a zero-sum game.

“The Navy has been out of the ports for three decades. We are working with the Nigerian Ports Authority (NPA) to establish port commandant at the seaports.’’ the Naval Chief has said.

However, reacting to the planned return, the Vice President of the Association of Nigerian Licensed Customs Agents (ANLCA) Dr. Kayode Farinto, described the move to return the Navy to the seaports as being informed by pecuniary interests.

He stressed that the Navy would merely constitute a nuisance at the ports the way they did in 1993, and wondered what value they will add to the operations of the port other than to encumber the process, while calling on the government to deploy the Navy where they are most needed.

He said: “About 90 percent of arms and ammunition come through the unapproved routes and not the ports. So the government should deploy them (Navy) to areas where there are gaps in the security architecture of the country. I just want to say that the government of the day is confused and if we look at it, if the government is serious, we will know that 90 per cent of these illegitimate arms are coming in through unapproved routes.

Meanwhile, the President of the Shippers Association of Lagos State (SALS), Rev. Jonathan Nicol, also condemned the decision to return the Navy to the ports.

“The Nigeria Customs Service is paramilitary and is saddled with the responsibility of opening up containers for examination and I am convinced they are up to the task. The Nigerian Navy should be concerned with our territorial waters and the Gulf of Guinea where we have so much security challenges bedeviling the country.

“Already, we have government agencies at the port doing almost the same thing, such that it is difficult to exit cargoes from the seaports, so why will they want to add to the burden? They should concentrate on the coastal waters where piracy is expected to be combated,” he said.

Nicol also stated that the bulk of the small arms and ammunition are not coming in through the seaports, but through the porous borders because of the hassles involved in 100 per cent examination.

“We don’t need an additional agency at the port because shippers that own cargoes coming to Nigerian seaports are already overburdened by the activities of government agencies at the port,” he warned.

Similarly, the National President, Africa Association of Professional Freight Forwarders and Logistics in Nigeria (APFFLON), Otunba Frank Ogunojemite, opined that the Navy at the seaports would not solve the proliferation of light and small arms into the country, stating that they will rather add to the already cumbersome nature of cargo clearance in the nation’s seaports.

Ogunojemite told the government to ensure the implementation of the Cargo Tracking Note (CTN), which he believed would help to know the type of cargo coming into the country, whether small arms are in them or not.

“Also, the government should collaborate with countries of origin because most containers that are bursted are due to information from the country of origin. What is wrong with the scanners at the seaports? The government should put them into work also. They should inform us about the purchase of scanners. We should put the scanners into use and they should function accordingly”, he pleaded.

He also asked the Government to deploy technology to monitor the nation’s porous borders where he said these arms and ammunition are coming through.