It is intriguing that well over one year after Ms HadizaBala left office as Managing Director of the Nigerian Ports Authority (NPA), some mischievous people still have her name on their lips. 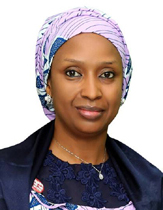 In their clout-chasing bid, these characters employ the services of some media outlets to publish falsehoods with the intention of drawing attention to themselves and giving them a significance that they do not possess.

In furtherance of this pursuit, a report entitled: Ahmad Wanka: The fearless NPA staff whose petition triggered HadizaBala Usman’s sack, was circulated on the internet on Monday 29 August 2022. It is curious that anyone would attempt to sell this narrative to the public given the fact that details of the events leading to HadizaBala Usman’s exit from the NPA are in the public domain. All these facts are available without cost on the internet for anyone in pursuit of the truth.

For instance, between 6th and 7th May, 2021, the media was filled with stories about President Muhammadu Buhari’s approval of the request that the former Managing Director step aside from office to allow for the investigation of the NPA management.

These reports indicated that the request was made by the former Minister of Transportation, MrChibuikeAmaechiwho claimed that the NPA had failed to remit the sum of N165.32billion to the Consolidated Revenue Fund (CRF).

The reports also reflected the President’s approval of Amaechi’s request for the constitution of an administrative panel of inquiry to conduct the investigation.
Of course, when the former minister inaugurated the panel a couple of days later, he introduced a few more items to the terms of reference to the panel. However, none of the items aligns with the recently published story.

Since some people are interested in confusing the general public on this matter, I reproduce the terms of reference of the panel as follows:

• Examine and investigate issues leading to the termination of other contracts of NPA and confirm compliance with the terms of the respective contracts, court ruling and presidential directives.

• Examine and investigate compliance with communication channels, as obtained in the public service.

• Examine and investigate the procurement of contracts from 2016 to date.

• Come up with suggestions and advice that would strengthen the operations of NPA and forestall such occurrences in future.

For eight awkward months, stakeholders in the maritime sector and the entire nation awaited the report of the panel with the minister grandstanding and making all sorts of insinuations.

Surprisingly, when the reports of the panel came to light, it absolved theHadizaBala Usman management of the alleged non-remittance.

In fact, the report indicated that the administration of the NPA remitted in excess of the N165b alleged to have been withheld, according to dailynigerian.com.

In a report published on February 15, 2022, the online medium quoted the panel reports to have informed that: “Although the final report of the committee was not made public, sources and documents seen by this newspaper showed that the panel verified that she remitted N182.99 billion to the Consolidated Revenue Fund, CRF. NPA provided detailed summaries of Operating Surplus payments to the CRF for which the Sub-Treasurer of the Federation confirmed credit and issued receipts.”

On this same day, the cable and as well THISDAY revealed details of a 21-point query raised in the query issued by the Federal Ministry of Transportation from the report of the panel indicating that most of the issues raised bordered on alleged insubordination, which the reports also said the managing director debunked in her response to the query.

Nigerians, especially the media, which is the repository of information should not allow themselves to be manipulated by people with ulterior motives as in the case under discussion. HadizaBala Usman, (like so many other credible Nigerians) served the country to the best of her ability. Regardless of attempts made to tarnish her image, investigations revealed that she towers much taller than her accusers and no one, can take anything away for that, just because they crave relevance.

Imam wrote in from Lagos.